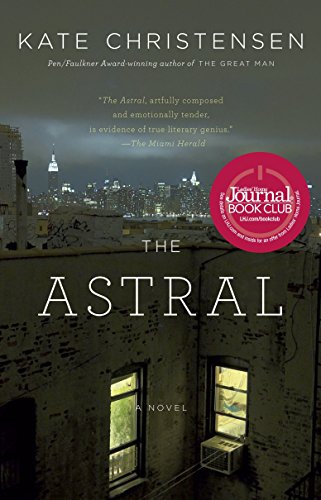 “Kate Christensen’s insights into the psyche of a middle-aged banished husband are astonishing.”

Harry Quirk, midlist poet, Brooklyn dweller, father of two grown children, and rejected husband of Luz, introduces himself: “I was hungry and in need of a bath and a drink. At my back thronged the dark ghosts of Greenpoint, feeding silently off the underwater lake of spilled oil that lay under it all, the polyfluorocarbons from the industrial warehouses. I had named this place the End of the World years ago, when it was even more polluted, hopeless wasteland, but it still fit.”

After 30 some years of apartment life in the Astral, a huge redbrick fortress complete with brownstone arches, three-sided bay windows, and corner towers, Harry and Luz have imploded as a married couple. Luz is the overbearing, pious, yet adoring mother Harry lost as a child. Harry stands in for the ne’er-do-well father who deserted Luz’s family when she was eleven. They have raised a daughter who is a lesbian freegan Dumpster diver, and a son who emerged from teen years of drug taking and social ineptitude to join a fundamentalist Christian cult.

It is not the plethora of modern issues that insinuates The Astral into your mind and heart. It is the characters and the familiar heartbreaking story of two people who have built a life out of propping each other up, a veritable fortress of a marriage, only to have its fatal structural faults bring it crashing into ruin.

Harry has a best friend, Marion, a photographer. They met as young artists newly arrived in New York City and enjoy a deep understanding, similar to what Pattie Smith and Robert Mapplethorpe had, but have never engaged in sexual intimacy. Luz, having always been jealous of their easy camaraderie, decided they were lovers after reading Harry’s latest cycle of sonnets. She threw his laptop out the window and Harry out of her life. She will not be reasoned with despite Harry’s attempts to explain the truth.

Kate Christensen’s insights into the psyche of a middle-aged banished husband are astonishing. As in her earlier novels, she brings the world of artists alive and creates a sense of place with the ease of a master chef preparing a gourmet meal. In Harry Quirk however, she has surpassed herself as a writer, giving glimpses of love, sex, and friendship from a middle-aged male perspective that feel as true as anything written by Philip Roth or John Updike.

Perhaps in this age of longer lifespan the coming of age novel needs to be balanced with the coming of maturity story. Ms. Christensen’s affair of the human heart includes friendship, sexuality, parenthood and even religion. Harry, an atheist since his Catholic mother’s death, investigates the true believer yearnings of his son and in this author’s hands—even the cult phenomenon gets a sensitive treatment.

Over the period of less than a year, we watch Harry come to a tenuous understanding of himself, his wife, his children, and perhaps even the future. Along the way one’s own life comes into clearer view. That is what good fiction does.