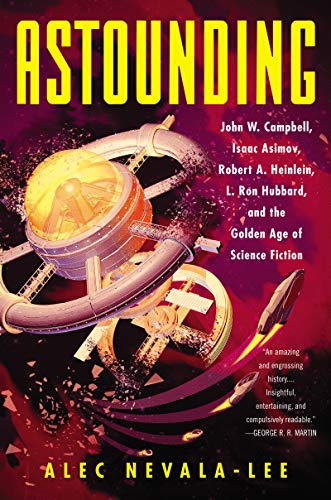 “miraculously, out these broken lives and troubled minds emerged the glory and beauty that is the science fiction genre.”

Many science fiction fans will know the name of John W. Campbell, editor of the highest circulation SF magazine from 1937 until his death in 1961. He edited some of the most famous stories and novels of SF’s Golden Age, and many of the central ideas of those tales originated from him, not from the authors themselves.  Some—including Isaac Asimov—would point to Campbell as the most influential single person in the formation of the genre.

On its own, that description might suggest a literary hero, a far-seeing giant whose genius begat a century of stories beloved by millions. In Astounding, however, biographer Alec Nevala-Lee draws an exquisite portrait of a flawed and misguided man who seemed not to understand the true power of what he had created.

Nevala-Lee guides the reader through each stage of Campbell’s life, covering first his childhood and early life, then the Golden Age of SF, World War II and the atom bomb, the fifties, and finally his death in 1961.

The book could have been titled The Rise and Fall of John W. Campbell, since it maps, through numerous letters, interviews, and editorials, his rise to prominence and subsequent collapse into obsession. Instead of valuing the literary power of SF to address profound human issues, Campbell campaigned to validate the genre through its ability to accurately predict scientific advancements. To this end, he increasingly embraced fringe pseudoscience and quack inventions, ultimately believing that many of the fantasies from his author’s stories, such as telekinesis and telepathy, were truly possible.

Astounding chronicles not only Campbell’s life, but also those of the authors whose lives most circled and intersected his. Asimov, Heinlein, and L. Ron Hubbard play central parts in the drama, none of them admirably. Asimov regularly gropes women at conventions. Heinlein encourages his wife to sleep with another man and makes frequent enemies with his prickly patriotism. L. Ron Hubbard, the worst of them all, lies incessantly, abuses his numerous wives, and ultimately founds the Scientology cult, which feeds Campbell’s obsessions and looms like a much-foreshadowed specter over the whole narrative.

Other notable authors drift in and out as minor characters: Frederik Pohl, Ray Bradbury, Jack Williamson, Robert Silverberg, L. Sprague de Camp, A. E. van Vogt, and many others. Some, like van Vogt, are caught up and destroyed by Scientology, while others watch with horror from the sidelines.

This account, though carefully researched and impartially presented, is unlikely to inspire hero worship. Yet miraculously, out these broken lives and troubled minds emerged the glory and beauty that is the science fiction genre. The themes of artificial intelligence, time travel, space exploration, genetic manipulation, post-apocalypse survival, and alien visitation pioneered by Campbell and his contemporaries captured the imagination of a generation of scientists and writers, who in turn inspired a generation more.

Nevala-Lee does a marvelous job of presenting these authors as they truly were, with all of their genius and all of their flaws. This biography should catch the fascination of any serious science fiction reader, since the balance of human achievement and failure is itself a major focus of the genre. It turns out that whether Campbell understood it or not, the themes of science fiction were universal and lasting. His life might have been a train wreck, but the rocket he ignited made it to the stars.