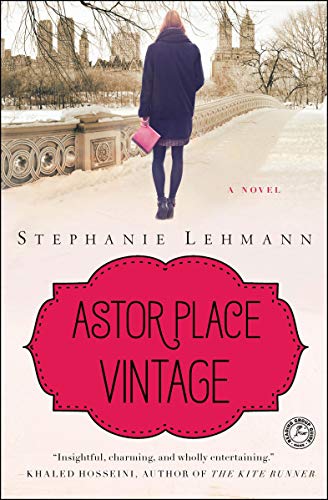 “. . . a good balance between literary and entertainment fiction.”

What starts as a novel about a modern young woman in New York City becomes parallel stories of two such women a century apart.

Amanda Rosenbloom and Olive Westcott are joined in time by a notebook. Amanda finds it sewn into a fur muff while sorting through purchases for her vintage clothing boutique in Manhattan in 2007.

Her business, Astor Place Vintage, is a labor of love—an inevitable result of her passion for history and beautiful items. “The past,” she says, as part of explaining her obsession, “continued on in our clothes, photographs, knickknacks, music, film, the written word—if we made sure to take care of it. The stuff, that is, not the people. I wasn’t into taking care of ghosts.”

Hm, ghosts. Funny she should mention that. A ghost tries to appear in this novel, in a subplot that feels gratuitous because, like a ghost, it never fully manifests. Through spooky noises and sensations-of-other-presence in Amanda’s apartment, we are set up to expect meeting Olive’s ghost, or else to find that Amanda might be Olive reincarnated.

Nothing like that happens, so the woo-woo part of the narrative could be deleted and never missed. The women are credibly joined by more prosaic coincidences. New York, despite its huge population, proves just how small the world is. Every day people and places overlap, generations apart, with everyone unknowing unless they seek the connections. Or in Amanda’s case, stumble upon a relic that links them directly to someone else.

Olive’s diary draws Amanda deep into 1907, spooking her quite enough with the similarities in their lives without any help needed from ghosts.

In fact, the women are so similar that sometimes one doesn’t realize the chapters have switched point of view, even though the story is written in their alternating voices. Fortunately, the book provides the narrator’s name at each chapter head, and is divided into dated sections.

It also includes black-and-white photographs from Olive’s period. This touch helps place the reader into yesteryear, to better understand Olive herself and why she appeals to Amanda.

Despite their difference in eras, it fast becomes obvious that some things never change. Both women seek to balance love, lust, life, money, family, career—trying to make it on their own, with nothing working out as planned.

Both run head first into inequality between men and women, in society as well as the workplace; also, both grapple with the consequences of having sex. While each suffers a near miss with pregnancy, Amanda still dreams of having children while Olive knocks herself out to avoid that experience.

This takes some doing, because Olive is as innocent as Amanda is worldly. Yet Olive’s diary presents a time gone by so convincingly that her story dominates the book.

It also clears the rose-tinted lenses through which Amanda views history. She comes to realize:

“. . . Olive’s era wasn’t exactly utopia. Could I honestly say I wanted to live back then? Deal with men [who assumed] a woman was damaged goods just because she lived with women who worked? Thank god for all the freedom I took for granted. Olive risked breaking rules that I never had to bother with. Her very life straddled the transition from Victorian to Modern. She’d certainly embraced her era. It was about time I embraced mine.”

Amanda goes on to express the moral of the story: “Maybe I already was living my era. It would take someone looking back from the future to have the perspective to know I might be the perfect example of a woman from the first decade of the new millennium: failing small business owner in a haze of nostalgia for a romanticized past while living in perpetual childless bachelorettehood in a society that encouraged people to replace human contacts with virtual ones.”

Yes, that will sound familiar to many a working woman in metropolitan America.

The issues covered in the story make it a woman’s book, unlikely to appeal to the male adventure audience. Worth a read, though, by anyone interested in good writing, well-crafted storytelling, and early 1900s U.S. culture.

At the same time, it presents universal issues anyone can relate to, making Astor Place Vintage a good balance between literary and entertainment fiction.