The Aspirant: Crawling Toward a New World 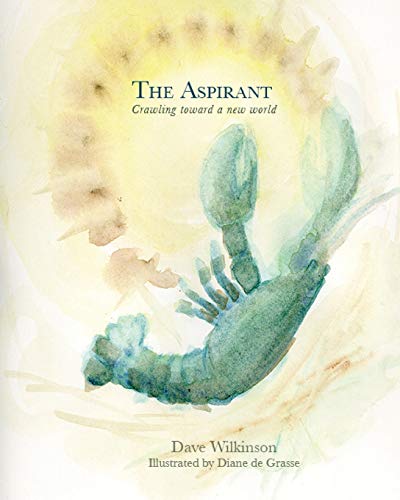 A lobster isn’t the most likely character for a children’s book. Yet Dave Wilkinson creates a modern-day fable based on the life cycle of the crustacean in The Aspirant.

The tale centers on Simon and his quest to reach the surface via a lobster trap. It’s not until he meets old-timer Harold that he begins to question his ultimate desire. The moral of the story is a lesson about the danger of blind faith. The importance of an individual searching for the truth is emphasized over passively accepting what is believed to be common knowledge. A mob mentality leads to a life centered around a single motivation. In the end, the idea of living a more simple, authentic life is abandoned.

The main terms in the book are based on a vocabulary created by Wilkinson. A one-page glossary explains key words such as unfoldment (the time when a lobster sheds its shell), manna (lobster bait), and gobbler (human being). This may be confusing for a younger reader who is used to stories told in a literal rather than a figurative style.

The lack of interior illustrations also makes The Aspirant a better choice for a tween reader with a more focused attention span. The book is best experienced in a group setting where the symbolism can be explained and expanded upon through interactive activities and discussion sessions.

Experiencing marine life through the eyes of a lobster provides a fascinating look at an underwater world. The creativity of Wilkinson’s narrative is extraordinary, with its fresh approach to a genre dating back to Aesop. He effectively overturns long-held assumptions. Shouldn’t a lobster fear a trap? Wouldn’t the surface be the last place a lobster would want to go? Why would a lobster aspire to be eaten? Their contradictory behavior revolves around a lack of credible information. The handing down of false presumptions puts the lobster on a crash course for extinction.

Their saving grace comes in the form of human children who are not yet corrupted by the all-consuming drive for financial gain. Their hearts remain open to the forces of peace and love. As Harold recounts to Simon his rescue from the auction block, it becomes apparent that it wouldn’t have happened without the heroic actions of a fourth-grade class. Their courage in standing up for their beliefs allows Harold to return to the deep with his new-found knowledge of the surface. Finally, the lobsters have access to the truth.

Overall, this book suggests that the propagation of fiction for fact is not a worthwhile aspiration.