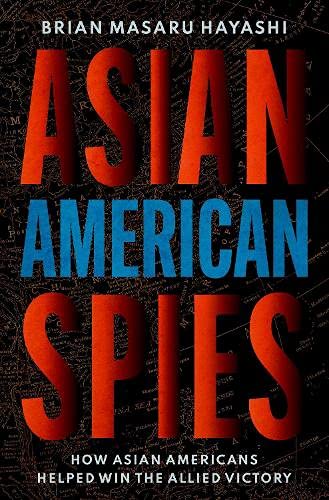 “For those wanting never-before-published information about Korean, Japanese, and Chinese Americans in the OSS, this book will prove a windfall.”

Brian Masaru Hayashi offers an in-depth look at how the secret services, specifically the OSS (the forerunner to the CIA) used Asian Americans oversees to gain information about the Japanese military and to sow “black” propaganda, efforts to demoralize Japanese soldiers and civilians. This book is not a thriller, with stories of different spy mission woven into a narrative of intrigue. Rather it is a solidly researched scholarly study. Hayashi spells out the book’s mission early on:

“For studies on the OSS, Asian American Spies provides a valuable corrective to the Europe-centric view of the agency. It also brings to light Asian American agents and their activities for the OSS in ways not possible until 1996, when Congress released all former OSS members from their legal obligation of silence. For Asian American studies, it offers a rare comparative look at three Asian American communities historically, and how social, economic, and cultural tensions within and between these communities created a dynamic mix from which these agents for the OSS were recruited. It also points to how some Asian Americans were able to play a large but behind-the-scenes role in postwar American intelligence. And finally, for studies on race and loyalty, this book shows that racial antipathy was far from pervasive in the OSS.”

One of the central themes, as seen in the paragraph above, is an attempt to prove that the OSS wasn’t prejudiced against Asian Americans, at least not against specifically Japanese Americans, despite Japan being an enemy of the United States. The head of the OSS, William Donovan, was certainly leery of other nationals, such as Ukranian Americans, but Hayashi goes out of his way to “prove” Donovan’s faith in Japanese Americans:

“Donovan called attention to the flaws of the mass removal and internment proposition—ignoring  the findings of three federal government agencies tasked with such an investigation prior to the war, strirring up unnecessarily a relatively hysteria-free West Coast, creating confusion in the surrounding communities where Japanese Americans resided; disrupting defense, especially aircraft production; and pushing Japanese Americans to support Japan after providing inadequate care for their possessions which thieves and arsonists would despoil. Instead Donovan recommended John Steinbeck’s proposal for using the pro-USA Japanese Americans to keep watch over potential troublemakers within the group.”

This paragraph gives a good sense of the language of the book. Despite talking about individual spies, there are no dramatic capers here. This is carefully gathered data presented in an organized fashion. For those wanting never-before-published information about Korean, Japanese, and Chinese Americans in the OSS, this book will prove a windfall. Those expecting cloak and dagger dramatics should choose a John Le Carre novel instead. Hayashi has taken advantage to the easing of secrecy after 1996 and compiled an exhaustive dossier of Asian Americans involved in all forms of espionage during WWII. His writing is functional but never dramatic. There is no grand storytelling here. That will be another writer’s task, using the fruitful research offered here.