Ashes of Hama: The Muslim Brotherhood in Syria 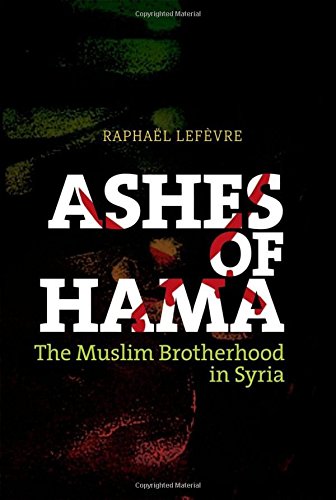 “. . . an impressive and unprecedented compendium of research . . . a veritable slog.”

Ashes of Hama could be an important aid for the policymakers currently shaping western interventions into Syrian civil war. Sadly, many of those policymakers will never read it.

Raphael Lefevre, Gates Scholar and PhD student at Cambridge University, details the evolution of political Islam and the Muslim Brotherhood in Syria from the ideological seeds of the movement in the 19th century to the attempts of today’s exiled Brotherhood to regain relevance in their home country.

The centerpiece of this account is the 1982 massacre at Hama, during which Hafez al-Assad’s military forces slaughtered an estimated 20,000 Syrians in an effort to wipe out the Muslim Brotherhood, the organization the regime blamed for a series of assassinations and attacks. The memory of that massacre is still fresh in the psyche of the rebels fighting Bashar al-Assad’s regime today.

The Syrian Muslim Brotherhood is an important player on today’s world stage—more important than most westerners realize.

The Brotherhood is currently the largest group driving the Syrian rebellion. Though many conclude that the rebellion is doomed, the Brotherhood controls a large portion of the current distribution of arms, some of which are now coming from the United States. Those arms will still be in the hands of Islamic militants when the war is over and have the potential to reach far beyond Syria’s borders.

Additionally, in the unlikely event that Assad’s regime falls, the Brotherhood will have a significant—if not dominating—influence on the new government. In either case, it is vital that western policymakers understand who and what the Syrian Muslim Brotherhood is as they determine how much support to give the rebellion.

Dr. Lefevre has made a laudable effort to provide the world with a history and context of the Brotherhood that meets this need. Ashes of Hama is an impressive and unprecedented compendium of research on the subject, including interviews with current Brotherhood leaders and documents captured during the Bin Laden raid.

The best aspect of this book is the completeness of the history openly presenting militant activities and violent rhetoric of Brotherhood members alongside the leadership’s more moderate proclamations. Unfortunately, the fresh research and completeness of Ashes of Hama is muddled by a clear bias toward the Brotherhood as well as by Dr. Lefevre’s unreadable style.

Dr. Lefevre’s objective is to show the Syrian Muslim Brotherhood as a peaceful, moderate organization that struggled with militant factions among its members through the ’70s and ’80s and has now returned to its moderate roots during its exile; however, the history he presents does not support his analysis.

What emerges, instead, is a picture of an organization whose members helped found Al-Qaeda and whose leaders will say whatever they need to in order to gain public support for their Islamist agenda. Even the current democratic rhetoric of the exiled Syrian Muslim Brotherhood appears duplicitous in nature, trying to differentiate between an Islamic state and their new concept of an “Islamic civil state.”

The organization’s few true believers in democracy have been marginalized or purged by stronger, more militant voices throughout its history, even as Dr. Lefevre presents it. There is no reason to suspect a different result should the Brotherhood come to power in a post-Assad Syria. The contradiction between the author’s bias and the implications of the history he presents is confusing.

Though he dances around the issue, Dr. Lefevre also fails to directly define “moderate” as it applies to the Brotherhood. This is a relative term. What moderate means to the western reader is significantly different than what it means to the Syrian Islamist. Moderate for the Syrian Muslim Brotherhood means advocating a state in which Christians, Jews, and women are subject to Sharia law, far from a western view of the term.

It is unlikely that the Brotherhood could effectively administrate even this level of “moderate” in a new Syria. The reality on the ground in Islamist-controlled sections of the country is that Christians and Jews are being purged and women are being repressed or subjected to unspeakable atrocities. Even if these are not the policies of the exiled Brotherhood, they are certainly the actions of its constituency inside Syria, a constituency it will have to appease if it is to take power.

Dr. Lefevre’s language and structure further muddies the water. His style is characterized by an excessive and unnecessary use of passive voice—far beyond the usual academic style. The result is a confusing wordiness that forced this reviewer to continually reread sentences and paragraphs to break out his meaning.

Additionally, the structure of the work is rambling and redundant. The book is chronological as a whole, but within each section Dr. Lefevre bounces back and forth between decades, revisiting events and people as if they are being introduced for the first time. These failures of style and organization make reading Ashes of Hama a veritable slog.