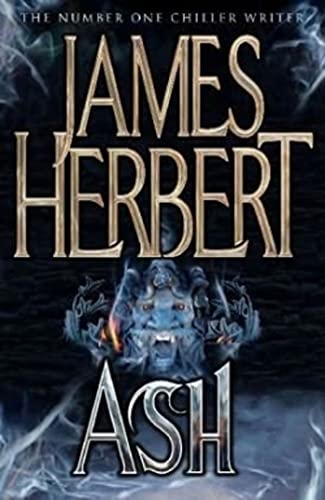 “. . . the editor either fell asleep during the first chapter or ran out of red ink.”

It is interesting to note that the publisher’s blurb for Ash, usually carefully crafted to whet the reader’s appetite, is limited to: “The World Grand Master of Horror cordially invites you to an idyllic Scottish retreat with beautiful rooms, luscious gardens, a breath taking view . . . and a basement full of secrets.” It sounds almost as if it should end with R.S.V.P. Was it done this way because the mere mention of The World Grand Master of Horror would be enough to guarantee sales, or because there was little else to say about the novel?

No one can dispute that James Herbert has been a giant among horror authors. He deserves the recognition that has been bestowed on him. This fact makes the publication of Ash far more mysterious than the plot itself, because any reader who knows the works of the author will be left wondering what the hell has happened.

The premise of an isolated castle in Scotland being home to something ancient and evil offered much potential for a dark horror, yet all Herbert has done is dish up an over-written, rambling serving of dubious right-wing tendencies and inconsequential observations. The best thing that can be said about the characters is that they are stereotypical, for without this they would be practically indistinguishable from one another.

The story is so lacking in pace it could almost be read backward. When David Ash is being driven from the airport to the castle, the journey is so long and dull that any reader will ache to press the driver’s right foot to the accelerator and hold it there. If only. Yet it isn’t even the dreariness of the plot that is the worst aspect, it’s the writing itself. “Dalzell gently applied pressure on the accelerator once more and the car resumed its journey with gentle speed.” This is supposed to be a horror story, not “Downton Abbey.”

The unchecked use of speech tags at times risks descent into comedy, something that would destroy all sense of fear were there to be any in the first place:

Christ, Ash silently exclaimed. . . .
“Well, Mr. Ash, shall I show you to you room?” he asked deferentially.
“Shoo!” he hissed sharply, but not too loudly. . . .
“Have a care, Mr. Ash,” the ranger advised unnecessarily.

Actually, vast swathes of the prose are unnecessary, giving the impression that the editor either fell asleep during the first chapter or ran out of red ink. Ash is 700 pages; at 300, with lots of tightening up, it just might work.

As it stands, Mr. Herbert fails even to scare his protagonist: “. . . all these nauseating elements combined to make Ash almost terrified.”

It is, to be honest, as chilling a tale as, well, Noddy in Toyland. Then there is the frequent head-hopping, or point of view shifts, which was widespread 25 years ago but is regarded as sloppy today, not to mention dialogue so dire it should be used in creative writing classes to show how not to do it.

So when Ash says, “I could cheerfully shoot the guy who wrote those bloody horror books about rats” it is easy to picture thousands of readers forming a queue behind him.

No one can derive pleasure from finding so much at fault with a work penned by an author of Mr. Herbert’s standing, so it does beg the question as to what has happened here. Some have questioned whether Mr. Herbert has actually written Ash or if a talent challenged ghostwriter stepped in. Others wonder if Herbert has simply lost it.

Whatever the explanation, the readers deserve an explanation, for the worst thing in all of this is that a great career has been sullied. And that, if not horrific, is saddening.