Who Killed These Girls?: Cold Case: The Yogurt Shop Murders 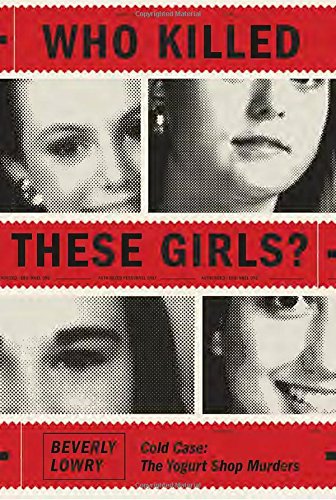 “In 1991, Austin was on the verge of becoming what it is today, but back then nobody had a clue. While Houstonians liked to say Austin was hoping to become a grown-up city, too, someday, nobody here took offense. Who wanted to be like Houston? Then came Yogurt Shop. We lost our innocence that night became an official mantra . . . And then, when the crime remained unresolved year after year after year, it became a permanent part of our history.”

On December 6, 1991, the naked, bound-and-gagged bodies of four teenage girls were found shot to death at the I Can't Believe It's Yogurt! shop in Austin, Texas. This case captivated the Austin community and frustrated both police and the families of the four victims. The search for the killers resulted in numerous suspects.

Eight years after the murders and under intense pressure to solve the case, four young men were arrested and charged with the crimes. Two of the accused were convicted, but the verdicts were later overturned on appeal due to gathering of false statements and coerced confessions. Today, the Austin Police Department insists that the four men arrested for the crimes were guilty of the murders, but the case remains open. Beverly Lowry, the author of six novels and three works of nonfiction that includes Crossed Over: A Murder, A Memoir (2002), revisits this thought provoking and captivating case in Who Killed These Girls? Cold Case: The Yogurt Shop Murders.

The author’s gripping examination raises serious doubts about law enforcements handling of the case and after expertly recounting the horrifying specifics of the murders, meticulously scrutinizes the countless blunders encountered by police during the investigation such as evidence gathering errors, inept and unethical interrogation practices, and failure to follow-up on even the smallest of leads.

Although the central narrative of this book is most certainly the coerced confessions of the defendants and reversal of their convictions, this study raises many tantalizing questions, and the reader is left to contemplate highly controversial issues such as police misconduct and society’s role in preventing its youth from committing savage crimes. But in the end, four innocent young girls were murdered in cold blood and their killers remain at large and unpunished.

So who did kill the yogurt shop girls? Lowry has several theories and powerfully states: “How do we know what we know (or even remember) and when can we be, if not certain, at least reasonably persuaded that we’ve hit on the truthful versions of what really happened? Maybe doubt is never reasonable and memories are closer to dreams than accurate recollections. Perhaps facts and solutions exist only in the science lab, and not always even then, and the best we can hope for is a perception that suits our individual temperament. In other words, what we’re prone to believe given genes, upbringing, class, culture and all the rest. And perhaps there’s no such thing as closure, in which case nothing ever ends anyway.”

Who Killed These Girls? Cold Case: The Yogurt Shop Murders is well-researched and thought provoking. It is a terror-filled thrill ride which is captivating from start to finish. It is highly recommend for anyone interested in true crime, unsolved murder mystery, or American law enforcement policies and practices.