The Artificial Ape: How Technology Changed the Course of Human Evolution (MacSci) 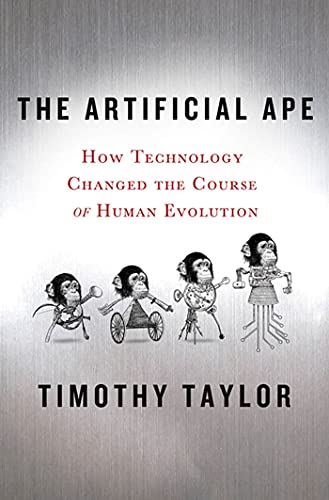 The Artificial Ape is a book with a plausible idea, but that is all it has. If you are looking for a convincing argument that “technology changed the course of human evolution” or even some compelling evidence, this is not the book for you. However, if you like informed speculation about humanity’s prehistoric past and you enjoy surveys and summaries of this immensely long and fascinating period, The Artificial Ape will keep you turning the pages.

Taylor is a well-known and popular archeo-anthropologist and is beginning to make himself a name for controversial speculation. His Prehistory of Sex takes us back 8 million years and The Buried Soul makes some startling claims about how widespread cannibalism and vampirism were in prehistory. The Artificial Ape follows in this tradition.

Taylor’s main contention is that tool use in early hominins was a necessary step to allow us to develop our large brains. In particular, he speculates that the invention of the baby sling must have occurred about two million years ago (although there is no actual evidence). This would have allowed a hairless ape with an upright gait—and thus a restricted pelvic gap—to give birth to increasingly immature babies, ones that could not cling to their mothers and would need to be carried, thus allowing the brain to continue to grow and develop outside the womb. As Taylor puts it, turning ourselves into artificial marsupials.

He makes much of the fact that tool use in hominins began about 2.5 million years ago, long before signs of accelerated skull-size began to be seen in the fossil record (after 2 million years ago). It is a puzzle that stone tools were being made and used before Homo ergaster and then Homo erectus began to develop their larger brains, and it is this puzzle that Taylor’s hypothesis attempts to tackle.

Taylor also points to the fact that an ape with an upright gait has a much shorter intestine than one on all fours. This means that not only meat eating but cooking may have been essential precursors to the development of bipedalism, simply because of the difficulty of finding sufficient nourishment from a vegetarian and raw meat diet with a short gut, at a time when we would have been extremely active and burning calories at a rate rarely seen in humans today.

Interestingly, recent evidence, published after the book was released, pushes the date for tool use and meat eating back to perhaps 3.4 million years—the pre-Homo days of Australipithecus afarensis. This find gives Taylor a 1.4 million year gap to explain before brain sizes begin to increase. But it does provide more time for full bipedalism to evolve after tools for butchering meat are first seen.

Given the paucity of the evidence, much of what Taylor proposes must be taken with a pinch of salt. For example, hominin skulls are quite plentiful across the last two million years, but there are only a dozen or so before that time. The graph of brain capacity against time that he presents is quite compelling but it would not need many new data points in the pre-2 million years’ range for it to look very different. More critically for the argument, there are just three hominin pelvises that have been found covering a period of almost 3.5 million years. While they approximately match the required changes in morphology for an ape specializing increasingly in bipedalism and immature neonates, it is very little to base an argument on.

So the book is disappointing in that, having made its surprising but apparently reasonable claim, it then provides scant evidence and only weak arguments in support of it. It is disappointing in other ways, too. It contains long and frequent digressions into areas of human cultural evolution that are not strongly connected to the main argument and which tend to dilute and confuse the message.

While fascinating in their own right, Taylor’s discussion of neolithic art and culture do not contribute much. Similarly, his extended discussion of why Tasmanian aborigines had apparently “regressed” to a level of tool use and a style of living not far removed from that of chimpanzees, while a very useful antidote to Victorian condemnation of and dismay at their lifestyle (which still persists in a mild form in academic circles today), does not strengthen his argument appreciably.

Some discussion as to why other hominids (the great apes) have not taken the same evolutionary path as humans, despite the strong probability that they were as proficient with tools as our distant ancestors were, would have been worthwhile. It is likely that chimpanzees have been using tools for as long as us, yet it has not led either to bipedalism or to increased brain size. The same problem arises with birds. Modern studies show extremely surprising sophistication of tool use in crows and other species of bird, yet we do not see the same evolutionary tie to tool use that Taylor suggests for ourselves. Birds have not become “artificial avians.” Why not?

The same problem arises with dolphins, which also use tools. Bird brains also raise the interesting problem for Taylor’s hypothesis that their brains are notoriously small. Claiming that tool use (technology) enables increases in brain size, in the face of a crow’s tiny brain, begs the question as to whether the evolution of technologies and brains is causally linked at all. It would have been useful if Taylor had addressed some of these issues.

The Artificial Ape is a good read. It is full of interesting and provocative ideas and information. Yet, while it is interesting and its main idea is appealing, in the end, it fails to make its case.