The Art of War in an Age of Peace: U.S. Grand Strategy and Resolute Restraint 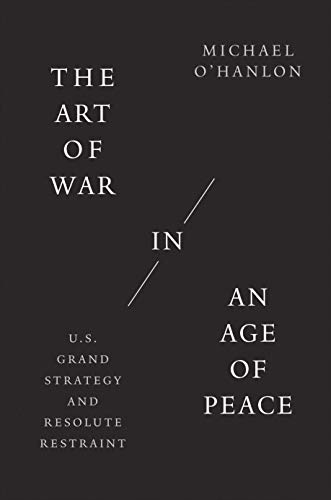 Michael O’Hanlon of the Brookings Institution has been working as a defense analyst in Washington, DC, for many years. He bills his latest book The Art of War in an Age of Peace as a proposal for a “grand strategy” for U.S. national security. He calls this strategy “resolute restraint,” and invokes the legendary diplomat George F. Kennan as his model.

Kennan is conventionally viewed as the intellectual father of the containment doctrine that guided U.S. foreign policy during most of the Cold War. But Kennan, as O’Hanlon surely knows, spent much of his later career distancing himself from his famous 1947 Foreign Affairs article that counseled muscular containment of the Soviet empire. Indeed, it is arguable that had Kennan been influential with the Reagan administration in the 1980s, the Soviet empire might have survived.

O’Hanlon explains “resolute restraint” by saying what it is not. It is not full-scale retrenchment. It is not “offshore balancing.” It is not muscular containment. America, he advises, must strengthen its alliances but should not expand them (especially NATO, which Kennan opposed at its inception in 1949). It should rely more on economic pressure and diplomacy than kinetic war. O’Hanlon at one point describes his strategy as “asymmetric deterrence,” using “non-lethal tools” of statecraft.

The bulk of O’Hanlon’s book, in fact, is not “grand strategy” at all. Instead, O’Hanlon writes about regional strategy, even country-by-country strategy, all under the broad theme of “resolute restraint.” There are separate chapters on Europe and Russia, China and the Pacific, Korea, the Middle East, and multinational dangers such as biological and nuclear weapons, climate change, cyberwar, and internal dangers to American unity.

But there is very little in the book that brings all of these regions, countries, and multinational dangers together in a “grand strategy,” other than his counsel to defend the global rules-based order and promote democracy, while limiting alliances, refraining from using force “quickly and overwhelmingly in crises,” and refraining from pursuing “maximal goals” over “crucial matters.”

On specific issues, O’Hanlon recommends maintaining but not expanding NATO, while organizing and negotiating with Russia a “new security architecture for eastern Europe” based on “permanent neutrality” for eastern European countries (Ukraine, Moldova, Belarus, Georgia, Armenia, Azerbaijan, Cyprus, Serbia, and other Balkan states); increasing our military presence in the waters adjacent to China and working collaboratively with India to handle a rising China; pursuing arms control with North Korea; renewing the nuclear deal with Iran; maintaining a tripwire force in South Korea; and lessening our footprint in the Middle East and southwest Asia.

There is little in O’Hanlon’s recommendations that is grand or bold. Many of his recommendations simply continue existing policy with a nod toward lessening the danger of kinetic war. His policy advice for multinational dangers—limiting weapons of mass destruction, pursuing arms control, alleviating climate change—mostly restates conventional wisdom.

Most significantly, O’Hanlon does not see China as posing an existential threat to the U.S. He counsels not containment in the mode of the early George Kennan, but rather a combination of engagement and competition—the same policy, it might be added, that had the U.S. standing idly by while China rose to be a peer competitor of the United States, often with the help of American investments and trade. With China, as with all potential adversaries, O’Hanlon counsels against excessive muscularity in U.S. foreign policy.

The most troubling recommendation in the book is O’Hanlon’s proposal to impose legal limits on a US president’s ability to launch nuclear weapons during a crisis. He recommends mandating that the Secretary of Defense, Attorney General, the Chief Justice of the Supreme Court, and the congressional leadership have a veto power over a president’s use of nuclear weapons. This would effectively defang our nuclear deterrent, which has played a pivotal role in making great power wars less likely.

“Resoluteness,” he writes, “is required to uphold firmly America’s commitments to allies and its core interests . . . Restraint is just as important, however—in trying to avoid drawing first blood in any great power crisis . . .” But there may be times when “drawing first blood” will be necessary “to uphold firmly America’s commitments to its allies and its core interests.” Perhaps that is why even O’Hanlon calls the book’s title “oxymoronic.”

This is not meant as a wholesale criticism of O’Hanlon’s specific policy proposals for specific regions and countries. Most of his policy advice is prudent and reasonable. His goal of avoiding wherever possible kinetic war is laudable. But this is not a Kennan-like approach to the world, especially the Kennan of the late 1940s.