The Art of Simple Food: Notes, Lessons, and Recipes from a Delicious Revolution 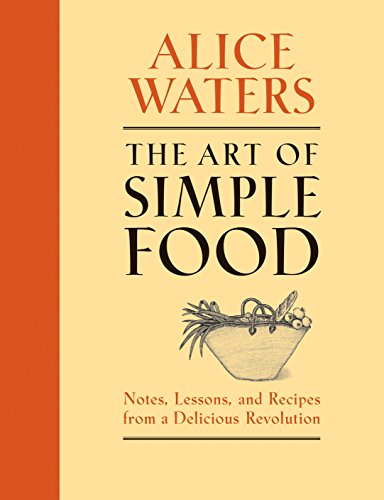 Like the EatingWell magazine covers, The Simple Art of EatingWell proclaims its allegiances up front, with a cover shot of twine-bound asparagus spears. Meat, fish, bread, and desserts have their place in the book, but the author makes clear what your focus should be: vegetables and fruit.

This isn’t a diet cookbook, though, and Jessie Price takes pains to make clear that, like the magazine and other EatingWell endeavors, this is not about deprivation. Each recipe gets a calorie count and nutritional analysis, but the focus here is on health, not weight. The book’s opening section provides the standard suggestions for a healthful diet, from eating more seafood to using herbs and spices to boost flavor. There’s little here to argue with, save the assertion that it’s a myth that you need butter and cream to make food taste better. True, you might not need them, but it’s hard to deny the lusciousness they add.

After a brief list of menu suggestions, the book moves into appetizers and drinks, offering healthful takes on such classics as hummus, French onion dip, deviled eggs, and chile con queso. Some of the magazine’s classic techniques to reduce fat and calories—using low-fat sour cream and nonfat yogurt in place of sour cream and mayonnaise—work well here, along with the interesting idea to sauté onions first, then simmer them in beef broth to add fat-free flavor.

A recipe for bean dip shows how EatingWell avoids being too dogmatic in its ingredient choices, using low-fat sour cream but full-fat cheese to keep a strong flavor. Chile con queso also uses full-fat cheese, but replaces some of it with a white sauce whose flavor gets a boost from beer; this recipe proved a hit with tasters of all ages. Spinach rolls also offer an inspired technique, moistening the phyllo with a mixture of oil and egg white instead of a cup of melted butter.

That appetizer chapter can help ease cooks into healthful cooking, and many of the soups that follow also offer creamy choices without all the richness of many soups. Pumpkin-apple soup, for example, will be smooth and flavorful, made better with a drizzle of hazelnut oil and a handful of toasted hazelnuts. Here the book begins its use of master recipes that dot the chapters (in this case, pureed vegetable soup made with carrots, peas, potatoes, or broccoli). Other such recipes, for sautéed chicken, steamed mussels, sautéed fish, or roasted chicken followed by recipes for leftover cooked chicken may be fairly standard, but just what many cooks need to get a weeknight supper on the table.

The salad chapter opens with two pages on putting together side salads from lists of greens, vegetables, add-ons, and dressing. Some interesting salads follow, such as a panzanella made with melon and prosciutto, and main-dish salads with chicken or steak.

An A-to-Z vegetable chapter offers one or two recipes per vegetable, plus tips on choosing, storing, and prepping each one. Some of the recipes offer healthful versions of such holiday standards as green bean casserole, creamed onions, and marshmallow-topped sweet potatoes, while others provide quick ideas for everyday sides. The chapter offers a great way for families to work their way through an alphabet vegetable challenge (eating a vegetable for every letter to expose children to unfamiliar choices as well as old favorites).

Sandwiches, pasta, and pizza follow the theme, keeping mozzarella sandwiches gooey but crisped in a cast-iron skillet in the oven rather than frying them; making an easy wrap with lavash filled with stuffed grape leaves, lettuce, tomatoes, and cucumbers; and offering up some rich but reduced-fat pasta sauces. A recipe for gnocchi comes with a page of photos to walk cooks through the easy steps, including the tip to simply dimple each dumpling with a fingertip instead of the slower method of running each along the tines of a fork.

Catfish and potato hash shows off the value of using highly flavored ingredients to overcome a lack of fat, especially if cooks heed the headnote and use a heavily smoked ham. That’s an addition a few other recipes might do well with, though it would knock the nutritional analysis off-kilter; for example, the shrimp and grits, while acceptable and heavily flavored by an entire bunch of scallions, cries out for the smoky edge of bacon.

That takes us back to the “myth” of butter and cream. In many of the recipes, cooks who haven’t converted to the EatingWell way may find it hard to resist the temptation to add a pat of butter or an extra shot of oil to many of the recipes. The photo of the hash, for example, suggests golden, sautéed potatoes with maybe even a few crusty edges; the recipe, while tasty enough, won’t produce that. (The book is full of artful food shots that, while tempting, are unlikely to be reproduced by hurried cooks putting together many of the 30-minute dishes here.)

For sweets, EatingWell avoids the trap of relying on fruit desserts to keep calorie counts in check, using a variety of tricks to produce recipes for chocolate cake, cupcakes, pudding, and tarts. Many work surprisingly well, though they won’t necessarily fool recipients into thinking they’re eating the “real” thing. A fool, usually made with pureed fruit and whipped cream, simply doesn’t taste the same when made with nonfat Greek yogurt and just a smidgen of whipped cream. Likewise, chocolate chip cookies made with whole-wheat flour and oatmeal lack the caramel flavor and mouthfeel of a standard cookie made rich with brown sugar and lots of butter.

The big “but” to follow that sentence comes in how tasty the fool and the cookies still are. The touch of whipped cream in the fool, and the half-butter, half-oil combination in the cookies make these recipes worth trying, a solid alternative to either extreme of avoiding all sweets or going full-fat in everything. For many cooks, shifting to the EatingWell way, even if just for some of the week’s meals, will be a satisfyingly healthful move.