Art Matters: Because Your Imagination Can Change the World 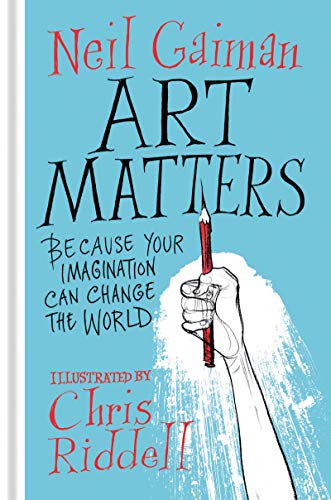 “politics on the level of the librarian, the parent, and the teacher. Adults who make information accessible to children challenge the structures of power, and Gaiman’s support is behind them.”

Neil Gaiman is the patron saint of goth artists and precocious literary teenagers. His readings are as crowded as rock concerts, and his book releases swirl with breathy excitement. His social media is deeply charming and utterly accessible. Since 2017 he has been a goodwill ambassador for the UN High Commission for Refugees.

Art Matters is a Neil Gaiman manifesto. It’s not a TED talk, but it easily could be (Gaiman’s wife, Amanda Palmer, delivered the TED talk “The Art of Asking,” based on her memoir of the same title). Like a TED talk, the book isn’t dedicated to nuance but to bold vision and relentless optimism. In the first essay, “Credo,” Gaiman concludes, “I believe that in the battle between guns and ideas, ideas will, eventually, win. Because the ideas are invisible, and they linger, and sometimes, they can even be true.”

These aren’t new ideas. Gaiman articulates concepts that are already widespread in Western culture. In places, he paraphrases Voltaire. In other passages, he echoes the Beatles. But Gaiman’s genius isn’t a genius of originality; it’s a genius of accessibility. His writing makes sophisticated concepts available to laypeople. He offers portals for young adults just broaching complex philosophical ideas, and he does so with charm and humor.

The second essay, “Why Our Future Depends on Libraries, Reading and Daydreaming” reaffirms that commitment to ideas for children. (In addition to his books for adults and young adults, Gaiman has written a number of eerie, wonderful children’s books. An interested reader might wish to begin with The Wolves in the Walls.) The front line of data accessibility remains the public library. The Internet exists, but children go to the library. They pick up books and consider ideas, even dangerous ones.

In this, Gaiman reads like a militant educator: “I don’t think there is such a thing as a bad book for children. It’s tosh. It’s snobbery and it’s foolishness.” It’s a profoundly democratic idea. Reading, not just reading the right books, is crucial. Librarians’ radical potential lies in their respect for all readers, not only distinguished ones.

Art Matters sidesteps contemporary politics. Gaiman’s manifestos don’t discuss race and class directly, and their gestures at the culture wars are oblique. Yet his assertion, “We need literate citizens,” remains political. This is politics on the level of the librarian, the parent, and the teacher. Adults who make information accessible to children challenge the structures of power, and Gaiman’s support is behind them.

The third and fourth essays of the book function as inspiration for aspiring artists rather than manifestos for militant educators. “Making a Chair” uses the analogy of building an office chair to explain the process of creating a book and defying the rules. “Make Good Art,” the longest of the four essays, exhorts aspiring writers and artists to take up the fight, using Gaiman’s own career as a model of what to do (and occasionally, what not to do).

“Make Good Art" doesn’t purport to be a guide to economic success in the arts. Gaiman acknowledges that his own success is to some extent good luck, though he doesn’t admit how much of his career grew in an economic reality which no longer exists. Cynical, burned out freelancers will find the essay trying in its relentless optimism. (Who is more frustrating than the successful outlier blithely encouraging others to try the same path?)

It’s in this last section that the illustrations in Art Matters really shine. The book’s text mimics the hand-lettering of comic books (the industry that launched Gaiman’s career), and each page includes a manic pencil-drawing by cartoonist Chris Riddell. The cat mentioned above, in danger of exploding, manages to radiate as much love and humor as terror (thank goodness).

Like much of Gaiman’s work, Art Matters’ ideal reader is probably a teenager: a talented oddball considering what do next. The focus on children in libraries is clearly a lens for not-quite-children to look through, and the illustrations are youthful and deliberately unrefined.

And Riddell’s illustrations pick up one of the strongest undercurrents in Gaiman’s work: value for girls and young women. The sketchers and writers, the muses and the artists, are more often than not girls, emphasizing that Gaiman’s identity (white, male) is not the only one, or even the most important one from a creative perspective.