The Art of French Baking 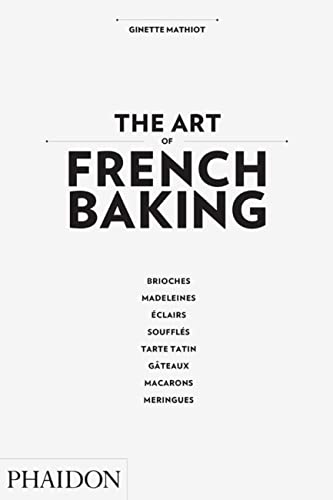 “. . . experienced cooks and bakers will enjoy the thrill of working with recipes written like the ones our ancestors cooked from, demanding flexibility and ingenuity.”

French cooks don’t really need to do much baking for a couple of excellent reasons.

In France, pastry making and cake baking tend to be the domain of bakeshops (patisseries) that appear everywhere in French cities. Patisseries definitely pose a danger to passersby because of the tantalizing aromas seeping out as the door opens and closes with the comings and goings of customers clutching bags or boxes of sweets. How is it possible to resist that brilliant little gold-flecked chocolate cake in the window? (Answer: It’s not.)

In addition to the patisseries, another factor precludes baking in the French kitchen: most French ovens in the home seem to require a Ph.D. in astrophysics in order to operate them without mishap.

But this state of affairs did not stop French home economist Ginette Mathiot from writing in 1932 what became one of the most popular baking books ever published in France.

Just who was Ginette Mathiot?

Ms. Mathiot first wrote Je Sais Cuisiner, France’s version of The Joy of Cooking, when she needed to blow out only 25 candles on her birthday cake.

Je Sais Cuisiner sold over six million copies. The recognized expert on French home cooking, Ms. Mathiot went on to write over 30 other books, including Je Sais Faire la Patisserie (Albin Michel, 1938). In a country where male chefs rarely released their stranglehold on the whole concept of cooking, Ginette Mathiot defiantly titled many of her books with the words Je Sais or I Know (How to). She earned the Legion d’Honneur for her efforts in promoting French culture and cuisine.

English speakers may now enjoy the simply written recipes that enabled three generations of French women to cook in an increasingly servantless and busy world.

Phaidon Press, publisher of Ms. Mathiot’s Je Sais Cuisiner as I Know How to Cook (2009), offers English speakers another of Ms. Mathiot’s books in Phaidon’s signature attractive format: her 1938 Je Sais Faire la Patisserie, published in English under the title of The Art of French Baking.

Again with the expertise of well-known French food blogger Clotilde Dusoulier (Chocolate & Zucchini), who also worked on Je Sais Cuisiner, the editors modernized and clarified various aspects of the 350 recipes. Among the changes made in Je Sais Cuisiner, one included leaving out instructions for gutting and cleaning rabbits. In the foreword to The Art of French Baking, Ms. Dusoulier mentions a change made in the English version of Mathiot’s book: the stipulation that cooks mix baking powder and flour together, something not done in the French edition.

Like most cookbooks on baking, The Art of French Baking starts off with a discussion of essential ingredients and techniques, followed by a chapter containing “Basic Recipes.” Here the cook finds information about the primary components that make French baking so unique: pastry doughs, frostings, fillings, sauces, and syrups. Individual chapters cover “Small Cakes,” “Gateaux,” “Tarts and Pastries,” Cookies,” and “Milk and Egg Desserts.”

The last section of the book features recipes from “Celebrated Chefs” of today, like Gail Gand and Pierre Hermé. The 150 full-color drawings and photos throughout the book provide cooks with some visual guidelines for the recipes.

And those recipes make Julia Child’s long-winded recipes in Mastering the Art of French Cooking seem like a Tolstoy novel in comparison. Short and to the point, Ms. Mathiot’s recipes may well appear too brusque at first for North American cooks.

Take the recipe for Sablés, a type of shortbread cookie that requires rolling out the dough to ¼-inch and cutting it with a cookie cutter. Six ingredients and about 80 words of instructions will likely make the fearful cook think, “Well, I can make that.” The dough came together well and rolled out smoothly. Everything worked well, although no definitions appear in the book for “superfine sugar”—which appears in most of the recipes.

And so making the sugar involved an extra step: whirling it in a food processor until look like a cross between powdered and granulated sugar. Another odd bit in the recipes turned out to be the requirement for seven or nine tablespoons of butter, requiring the cook to cut off an extra tablespoon from a stick of butter, sold in eight tablespoon sticks in American supermarkets. The Sablés won approval by tasters, who couldn’t (and wouldn’t) stop at just one.

Another recipe, for Orange Tart, required mixing up a rich, sweet pastry dough, which turned out well. The filling however, presented a few problems. Calling for the juice of one orange, the recipe would have been improved by stating an approximate amount. One rather dry orange produced very little juice, making it necessary to juice another orange and subsequently add another egg, steps that an inexperienced cook might not follow. The six tablespoons of butter rose to the top of the tart as it baked and splattered all over the oven. Baking time was considerably shorter than recommended in the recipe. But the tart tasted divine.

Other tantalizing tidbits in The Art of French Baking include Madeleines, Auvergne Gâteau, Jelly Roll, Chocolate Log, Parisian Custard, and Vanilla Soufflé. Most of these sweets taste far less sweet than American desserts, making it possible to really savor the flavor of orange or butter or other ingredients. With less sugar, the recipes become more accessible to some diabetics.

Novice American cooks may find The Art of French Baking a bit of a challenge, being used to having very precise measurements and expecting recipes to fit together precisely like Lego blocks. Paris Sweets (2002), by Dorie Greenspan, likely will appeal more to bakers and cooks just starting out on their kitchen adventures.

On the other hand, experienced cooks and bakers will enjoy the thrill of working with recipes written like the ones our ancestors cooked from, demanding flexibility and ingenuity.