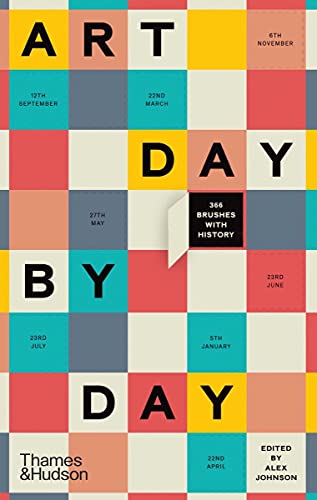 “From whimsical, wacky, pop culture, to the traditional classical artists, to those things-that-make-you-go-huh? head scratchers, Art Day by Day has something for everyone.”

On New Year’s Day, 1781, the first cast-iron bridge in England opened to the public. Spanning across the River Severn, tolls were collected and people were stopped in traffic for half an hour, eager to go the 300 yards between the industrial town of Broseley and the small mining town of Madeley on this new and improved trade route. In the 1950s the bridge transferred into the public trust and became a UNESCO World Heritage Site. Toll collecting ceased.

This is an excerpt of the first entry of the year in Art Day by Day. It kicks off with a quote from the diary of one John Byng (1743–1813) who seems to have been uniquely impressed by this feat of human ingenuity at the nascent stages of the Industrial Revolution. Johnson then embellishes with words of posterity explaining how the bridge influenced artists, painters, engravers, and spiritual naturalists for centuries.

In itty bitty font below the Iron Bridge entry are notes for, “Also on This Day” (January 1) 1944: death of English architect Sir Edwin Lutyens; 1999: Girl with a Pearl Earring by Tracy Chevalier is published; 2001: in Magnuson Park, Seattle art group Some People anonymously erect a replica of the monolith in 2001: A Space Odyssey. Each entry follows the same format: quote, embellishment, Also on This Day.

First impression of this entry is that it seems a relatively obscure way to begin an art book. With the subtitle mentioning the word “brushes,” one might assume this meant fine art, or painting specifically, as in creating with a paint brush. Instead, the intended definition of “brushes” is: a brief encounter with something, a momentary contact in passing. Or, applicable to this case: an offhanded brush with trivia loosely connected with anyone that might be considered an artist at any point over the last 300 years (or more in some cases).

That being said, some entries are indeed what one might expect from the fine arts perspective. March 7, 2017: American sculptor Kristen Visbal’s Fearless Girl statue is installed in New York City opposite the Charging Bull sculpture. (It has since relocated to face down the New York Stock Exchange). May 10, 1824: London’s National Gallery opens to the public (the venue was far too small and people complained about the crowds). September 12, 1940: The entrance to the Lascaux Cave is discovered near Montignac, France (uncovering 17,000-year-old cave paintings).

Entries take up no more than one page and are easy to digest on a day-by-day basis much like the page-a-day calendars in which consumers participate actively in the read-rip-toss-repeat cycle. These daily tidbits could be just the thing to bring to the office “water cooler” chit-chat break and used to thoroughly annoy coworkers.

If only illustrations had been included. One will desperately want to know what this famed Iron Bridge over the River Severn actually looks like, or see how badly Mattel butchered Frida’s likeness, or experience an Albert Namatjira landscape. Instead of the publisher providing pictures, the reader is encouraged to keep Google close at hand and to look it up for themselves as they go through the year, entry by entry. From whimsical, wacky, pop culture, to the traditional classical artists, to those things-that-make-you-go-huh? head scratchers, Art Day by Day has something for everyone.