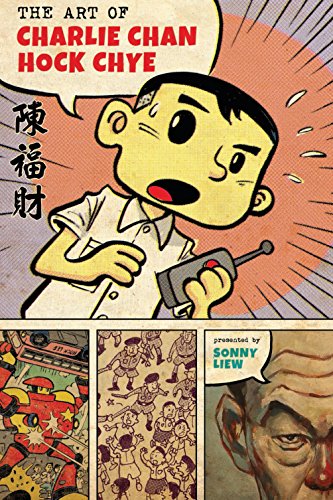 The Art of Charlie Chan Hock Chye “presented by” Sonny Liew is a collector’s item—like a good wine or a piece of fine, old furniture—in its beautiful and artfully aged presentation; and also in its weight—in both senses.

It is also an elaborate in-joke that has fooled many readers.

The Art of Charlie Chan Hock Chye presents the story of Singapore from just after the First World War to the establishment of Independence in 1965 and its current economic dominance as the world’s only island city-state, through the work of Charlie Chan, a political cartoonist and comics creator.

The artist himself, a fictional creation of Sonny Liew, is now in his early 70s, and looking back over five decades of his career documented by his comic strips and cartoons in a variety of styles; his oil paintings and sketches; mock-ups of articles; newspaper cuttings; magazine illustrations of stars of the day (Audrey Hepburn and Peter Cushing); and satirical song sheets on burning political issues—all gently yellowed with age.

This book can be read and enjoyed on many levels. The first and most obvious is the enjoyment of the career development and vicissitudes of Charlie Chan, his relationship with his parents and their laid-back support for his vocation,his developing friendships and romantic entanglements, and his negotiation with printers and suppliers of varying degrees of intransigence.

On another level the dramatic history of post-colonial Singapore is told through his daring depiction of the main dramatis personae: the British, the Japanese, the Malaya Communist party, the Chinese Communist Party—even the Cambodian Head of State, King Norodhom Sihanouk, rates a brief mention during this turbulent political time. The premiership of British-educated lawyer, Lee Kuan Yew, of whom Charlie Chan made a portrait, oil on canvas, in 2012, was the culmination of the political dram told through  Charlie Chan’s life and work.

Any reader unfamiliar with at least the outlines of the growth and development of Singapore might wish for more guidance—perhaps the endnotes could have formed a preface—but knowledge of the true story is almost incidental to the pleasures to be gained from this fictional biography.