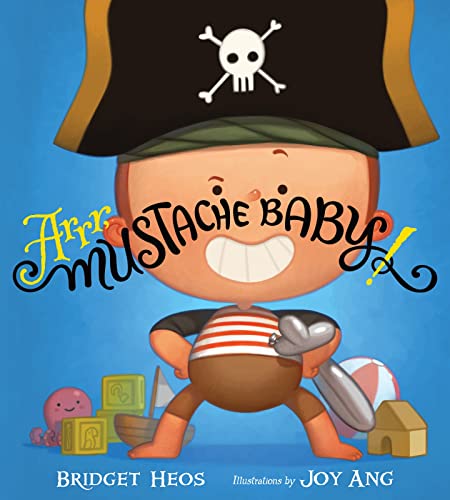 “A perfect read for a summer’s day.”

But when two pirates by the names of Captain Kid and Short John Silver steal a treasure and bury it, Javier and Billy vow to return it to its rightful owners. They’re able to locate and return the treasure (dolls, sunglasses, pool toys), but just then, the pirates attack! In a pitched battle, their anger transforms Billy’s mustache and Javier’s beard into bad-guy facial hair— and before you know it, Javier and Billy are pirates, too.

After defeating their piratical rivals in a dual duel, Billy and Javier go on a rampage, looting the landlubbers and dunking innocent “sailors.” But at last, their bad deeds catch up with them, and the pair are caught, forced to stand trial, and sent to the dungeons (their cribs).

Heos’s tale showcases the power of youthful imagination in transforming a day at the pool to a tale of derring-do, while also suggesting the importance of regulating one’s emotions. Ang’s goofy illustrations toggle back and forth from reality to fantasy as the bigheaded baby boys switch from sailor and pirate costumes to everyday wear in the turn of a page. And best of all, she works in many clever visual contrasts with the text. A perfect read for a summer’s day.