The Army of Alexander the Great 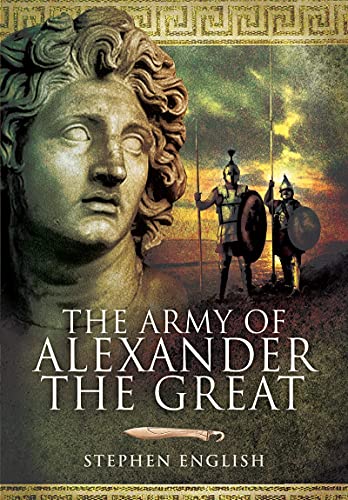 “Stephen English, with his unadorned, straight-up prose in The Army of Alexander the Great, proves that the amazing can be found in the details.”

In another concise, relatively short book on Alexander the Great, Stephen English explains in detail how “within the space of thirty-five years the Macedonian state . . . rose to rule most of the known world” through its army. Chapters show why these soldiers were “capable of campaigning at any time and any terrain” that they encountered.

Philip II of Macedon inherited “a kingdom beset by enemies and on all sides and on the verge of collapse” whose army had just suffered a massive defeat. He and his son Alexander forged an army not only capable “of overcoming any obstacle placed in their path” but of also “discipline and belief in the campaign.” The book deals with the character of the army and ends with illustrative campaigns.

Telling this history has particular problems. The earliest sources come from 400 years after the events and are not from records that are balanced, complete, or always credible. The “ancient historian” also has the problem of the “temporal gap between us and our subject.” “Of the many contemporary writers on Alexander, none [of their works] have [entirely] survived intact.”

The Macedonian army was a Greek invention, brought forth from the greatest and most progressive culture of the Ancient World. It began, ironically, with “the hoplite phalanx” “a relatively inflexible body, mostly incapable of complex manoeuvers.”

This “heavily armed mass,” with spears and shields, consisted of “relatively untrained” citizens “pressed into service as situations merited.” “A battle had to be agreed upon beforehand” and “more akin to a giant rugby scum than one of Alexander’s battles.”

An armed mob of murderous thugs would have accurately described most of the Ancient World’s military. Yet the Greeks could also pioneer and demonstrate military ingenuity on land and sea, such as at the famous battle of Marathon. With the Peloponnesian War fought by Athens and his allies opposed to Sparta and its allies “it became apparent that the old way of doing things no longer worked and new tactics were needed.”

Philip II saw new ideas develop in his years as a hostage in Thebes, a Greek city state militarily on its way to the top. This King of Macedon secured his borders in his first years and became “much admired and renowned for his political shrewdness.” Even his seven known wives represented political maneuvering.

Macedonia “had always been renowned for having some of the finest cavalry in the Greek world.” Alexander the Great would famously make good use of this horse, but their biggest military problem, and that of the Greek world, came from the lack of effective heavy infantry, something to replace the phalanx.

Philip II set out to create his heavy infantry (the pezhetairoi), equal to the cavalry in status, from his tribal society. His “extreme discipline” of these citizens using uniform training included having them “persuaded to fight with such ferocity and dedication through almost countless battles.” They used the same equipment and they played “organized highly competitive games.”

Philip organized his army into battalions (taxis) of six regional infantry and of three of newly created elite troops (hypaspists) drawn from all tribes, some 13,000 men, with which Alexander the Great, with his auxiliary troops, conquered the known world. He had to leave almost as many men behind to hold down his country and the conquered Greek states.

English gives biographies of the known taxis commanders and the equipment the army carried. The author similarly goes into detail with the cavalry, allies, and mercenaries who followed Alexander the Great. They included archers, horsemen, and spearmen, as well as light and heavy armored infantry.

Gold and silver had to be obtained to pay the mercenaries. Alexander, however, used his Macedonians as his core army and the allied troops and mercenaries as support troops, although they might find themselves on the front line. English includes more than the soldiers but also the artillery, colonies, fleets, garrisons, siege engines, and more.

Alexander himself led detachments of his Macedonian troops which “probably had more to do with Alexander’s need for conquest and personal glory, and his crushing boredom when inactive.” This work concludes with examples of how Alexander used his complex and highly specialized army in specific campaigns that are now largely forgotten.

The account of the famous battle of Issus, however, illustrates the wide difference of the modern Macedonian military compared with the past represented by the Persian Empire. Stephen English, with his unadorned, straight-up prose in The Army of Alexander the Great, proves that the amazing can be found in the details.

The Army of Alexander the Great contains an amazing amount of material for a subject with so little information. This work includes annotation, a bibliography, and illustrations.