Northern Armageddon: The Battle of the Plains of Abraham and the Making of the American Revolution [Review II] 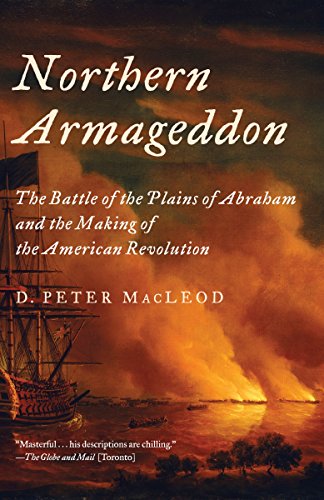 “will surely be a classic on its subject and a lot of fun for the lovers of good narrative built on well-researched military history.”

D. Peter MacLeod’s Northern Armageddon is an expanded edition of his earlier book on the history of the great military conflict for Quebec. It has excellent maps and choices for illustrations. The narrative is preceded by a glossary of the many persons mentioned in this epic tale of people and war.

MacLeod writes of this battle that decided the political fate of French America “as a clash between French and British armies, but also an American battle.” The victory at Quebec would not have happened without American sailors and soldiers.

Even after Quebec finally fell to the British, another campaign took place that might have yet been a French victory. The French Canadians and the Native Americans are no less a part of this story.

The book includes the views of the common citizen, Indian, ranger, sailor, and soldier. Even a now anonymous supply clerk had “like many others living through great events, taken up his pen to record his thoughts and observations for posterity.”

MacLeod writes that such “pawns had names, homes, and families.” Northern Armageddon is humanized by being “based for the most part on the letters and journals of participants and allows them, as far as possible, to speak for themselves.”

Detail abounds, from the importance of this conflict to the history of North America to a sometimes strained argument as to why it mattered to the American Revolution. MacLeod, however, also explains the relevance to the story, at least representatively, of bread, disease, flat-bottomed boats, shoe brushes, and so much more.

The British military and their American allies could have moved against the French in Alabama, Louisiana, and the Tennessee country but rightly concentrated in moving on Quebec by land and sea. That great and rich fortress city, more European than American, was everything to French America.

Canada had grown to a well-run colony of 70,000 people with a strong economy and powerful alliances with a vast number of Indian tribes. The years of the Seven Years War (in America 1754–1763), however, were rife with bad weather and destroyed crops. As MacLeod points out, starvation was as grave an enemy to the French as the British military.

The government in Canada had no legislature although its highly competent Governor Pierre de Rigaund de Vaudreuil was a man of the people. His equally capable military commander Louis–Joseph de Montcalm efficiently used his troops and effectively used the weather and geography to stymie the no less capable British war machine commanded by the irascible Major General James Wolfe.

Unable to effectively counter the British blockade, the French government gave up on its great American colony. The British, however, were forced to divert one fourth of the Royal Navy and other scarce resources to America for this effort although needed elsewhere in this world war.

North America was in no way key to British victory over France and its many allies. The campaigns for Quebec better served to keep the American colonies from organizing into a nation-state against Canada, a plan proposed by Dr. Benjamin Franklin. Such a new independent entity might have taken Canada and more under a hero of that war like George Washington.

The reader of nonfiction historical drama will find a thought provoking read in this book. It will surely be a classic on its subject and a lot of fun for the lovers of good narrative built on well-researched military history.