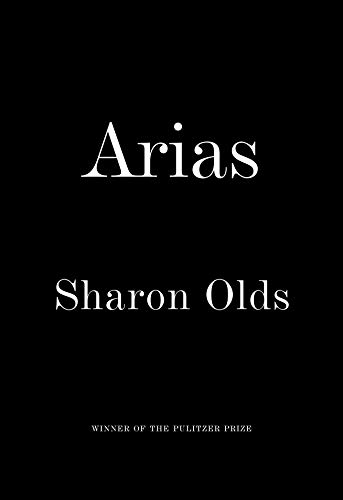 Name a topic that makes people uncomfortable, that accuses, that gives testimony of what is, what was, what has “been being,” and ugly as it might be, Sharon Olds has a poem about it.

“And I’d just heard there were women who preferred

to be ‘fucked in the ass,’ and men who preferred,

in women, the ass. And I’d seen the beauty

of my father’s face, in makeup, when he’d cross-

For her confessional body of work (which she was doing long before it was cool), she has been awarded the Pulitzer Prize and the T. S. Elliot Prize among many others. She has also sometimes been criticized, pigeonholed really, as a “women’s poet.”

But in Arias, her newest book, Olds puts her honest, clear verse to work mostly outside of the body, and looks instead at the body politic, at the social body we have created or destroyed together. Here, by looking at the miseries that sometimes threaten to overwhelm, Olds has turned confession into powerful denunciation, as in these lines from the opening poem, “For you.”

“so as not to forget: tray, cell phone,

martin, Trayvon Martin, song was invented for you, all art was made

for you, painting, writing, was yours,

our youngest, our most precious, to

to shield you—all was yours, all that is

left on earth, with your body, was for you.”

There are a total of 128 poems in Arias. They are different in form, in voice, in urgency. There are odes, elegies, prayers, love letters, manifestos, social histories, jokes, monologues, worded crying, and yes, there are confessions. They are just not repentant confessions, for what, Olds seems to ask,  at this point, is there to be repentant, or embarrassed about?

Instead, she engages with more joy, more strength, more faith, perhaps, than in earlier collections. There is a sense of lightness here, of play, of being carefree in the world that is being declared, or rather shared, as in these lines from the poem, “Sex with Love”:

“When I look up Venus’s eros-cone of a

when I look up Venus, she is on the same

page as the cunning bivalve of

the flytrap, she is held in the fine

thousand layers, the mille-feuille of the

dictionary’s petticoats—I find she was named

for love—for desire, its base ‘to strive for,’

‘to attain.’ And suddenly I see I do

write poems in sentences—not broken into

lines, but wound around the caesura,

making a caduceus. And I see that desire,

for me, is bound up with the idea of the eternal.”

Familial structures and the familiar figure of the mother are also here. Take a read of these lines, part of the beautifully-constructed, delicately musical, “Like a Sonnet”:

“My mother might be in the room with me, but she was

the chair in her room with a shellacked seat

Sure, Olds screams sometimes, but she does it without forgetting she’s a poet and, in the end, won’t we admit the things she has been screaming about feel more like truth every day? Her verse a Cassiopeia of early horoscopes and long sight, catching us, foreshadowing us (our mistakes, our dumb moves, she is looking at women, but in the context of their broader, changing, society) in,  perhaps, the way that only the wisest among our literary mothers always have.