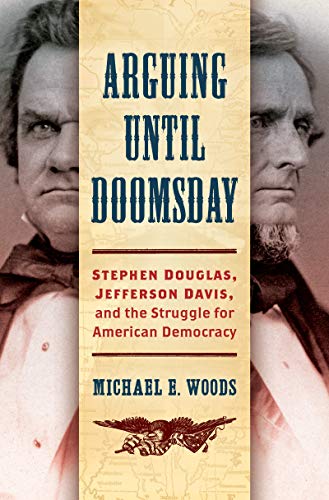 Giants roamed the landscape of American politics the 1850s. Those leaders knew their power and expected that the 1860s would further their ambitions. Unfortunately, they "are understandably dwarfed by Abraham Lincoln" and the Civil War. They also belonged to the generation after the legendary John C. Calhoun, Henry Clay, and Andrew Jackson.

In Arguing until Doomsday, Michael Woods sets out to "trace the long history of the Democratic Party's collapse" over slavery through the lives of Stephen Douglas of Illinois and Jefferson Davis of Mississippi. "Neither plays a heroic role in most narratives of Civil War causation," but while "Douglas would make the hemisphere safe for white man's self-government; Davis would make it safe for slavery."

"Neither agenda appeals to modern eyes" but activists who today attack ghosts did not live in that America or face its challenges. Davis and Douglas "were not characters in a tragedy; they were not voices of reason in an age of passion; they were not giants of a more heroic past" just as they were also not "part of a blundering generation."

Woods write a political history of Davis and Douglas. "This approach yields three interlocking stories: personal, partisan, and national." The Democratic Party "was an unwieldy coalition often sustained more by negative partisanship than by ideological uniformity." The author concentrates on the important, not on the incidental.

This work covers much that has gone overlooked. Davis, for example, "led a generation of Deep South Democrats who continued John C. Calhoun's pro-slavery crusade after 1850" and much more than "a prelude to his role as Confederate president." He came to pursue any opportunity "to make the Democratic Party a proslavery instrument" and "to promote a western slave owning Empire."

Contrary to legends, memoirs reveal Davis as "a dedicated partisan who ran himself ragged on the campaign trail and in Congress" with "readiness to resort loyalty politics and demagoguery." In 1847, Davis started a brawl with a fellow Mississippian over the issue popular sovereignty deciding slavery in individual territories.

Similarly, much appears in print about the campaigns and political differences between Douglas and Lincoln. Woods argues, however, that Douglas "was more than a speed bump on Lincoln's road to greatness." The author seeks to "reevaluate him as a national political figure" "devoting his life to politics . . . giving his heart and soul to the Democracy."

"The most polarizing antebellum Democrat" made "an amiable alliance" with Lincoln "against Davis's southern republic." Jefferson Davis, in his memoirs, placed "primary responsibility for the war on the Illinois Democrat" and not Lincoln. Yet Douglas traditionally takes criticism for "his racist demagoguery and southern connections" where he "heroically resists antislavery extremism."

The challenge of these two leaders "to maintain a nationally cohesive Democratic Party" came in conflict with "the challenges inherent in American federalism": both men knew defeat in campaigns. "Davis and Douglas survived these assaults by adopting more overtly sectional positions, thus deepening the divide between them."

"The interplay between state and national politics" proved a real problem for Douglas, as it does for some politicians even to the present. He had national ambitions but also, by necessity, "appealed to the hopes, class tensions, and ethnic conflicts that pervaded Illinois's most dynamic regions."

Davis and Douglas came and arose from very different Americas to create one tragic national history. They and Lincoln all proclaimed themselves men of the West, although Davis, as a reluctant army officer, knew more of the true West than Douglas or Lincoln.

Woods' narrative necessarily blurs the definition of the State of Mississippi, the Mississippi River, and the Mississippi Valley because it all merged in the thoughts of Davis, Douglas, and Lincoln. By whatever definition, slave produced cotton made “dreams of quick riches [that] anticipated California forty-niners or Texas oilmen" but "bringing a mixture of sleaze and gentility."

Davis and Douglas shared much in common. Both men courted their respective wives while campaigning. They went on the stump to elect James K. Polk as president and supported the war with Mexico, but all for different reasons.

"The two Democrats diverged on vital issues." Davis and Douglas took different sides on Oregon, state sovereignty over slavery, westward expansion, the Compromise of 1850, the Kansas-Nebraska Act, and the route of the transcontinental railroad. Each of them sought to become president but of different Americans. Ultimately, Abraham Lincoln defeated both of them.

Even readers who find the Civil War or politics boring could find this well-written narrative gripping. It helps especially now for readers needing to escape the present. All this solid but entertaining history really lacks for is background music. Arguing until Doomsday is fully annotated and has an extensive bibliography.