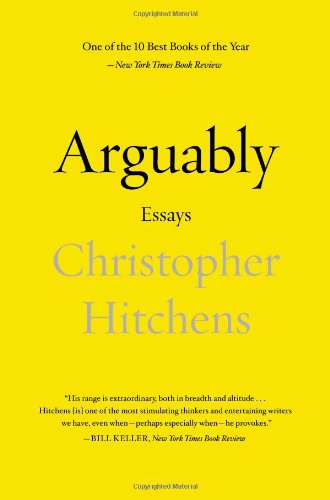 “Christopher Hitches has the eye of a painter and the literary skill of a novelist. He infuses his essays with the same narrative thrust that can be found in the most addictive fiction. He is the Ian Fleming of essays, unrumpled in his tuxedo no matter how dicey the event with a smoothly upper class mastery of the British language.”

Arguably is an atom smasher of a thing. A book to amaze your friends and confound your enemies. One that shows the best and the worst of its author.

When he is at his best, he remembers his own words from the opening of the essay “the Vietnam Syndrome:”

“To be writing these words is, for me, to undergo the severest test of my core belief—that sentences can be more powerful than pictures. A writer can hope to do what a photographer cannot: convey how things smelled and sounded as well as how things looked.”

And when Mr. Hitchens sticks to describing the scenery around him, the hills and valleys, the dark alleys, the mosques and minarets, he amazes, as here, from his essay “Iran’s Waiting Game:”

“Driving down through the desert, from Tehran to the holy city of Qom, I am following the path of so many who have made the pilgrimage before me. They either were seeking an audience with, or a glimpse of, Ayatollah Khomeini, or, if they were journalistic pilgrims, were trying to test the temperature of Iran’s clerical capital. As I arrive, darkness is gently settling over the domes and spires of the mosque and the Shia theological seminary, the latter of which is demarcated by a kind of empty moat which doubles as a market. But I am not headed for these centers of spiritual and temporal power. My objective is an ill-paved backstreet where, after one confirming cell-phone call, a black-turbaned cleric is waiting outside his modest quarters. This is Hossein Khomeini.”

Christopher Hitches has the eye of a painter and the literary skill of a novelist. He infuses his essays with the same narrative thrust that can be found in the most addictive fiction. He is the Ian Fleming of essays, unrumpled in his tuxedo no matter how dicey the event with a smoothly upper class mastery of the British language.

Therefore, this multitude of essays is a breeze to read.

They slip away as the pages fly as if in an old movie montage meant to suggest the passage of time, and as we come to know our author surprisingly well. By book’s end, we know his affinities (wine, women and fine writers—from Gore Vidal to Christopher Isherwood, and, especially, W. H. Auden—who grace these pages again and again, popping up here and there in essays on diverse topics, like familiar party guests who help themselves to food and drink), and the targets of his animosity (either George Bush, all religious figures, those who use the word “like” as a filler in conversation, most notably the “mildly authoritarian who want to make themselves un-interruptible,” and, especially, the waiters who fill the wineglasses of all those at a given restaurant table without asking permission first) to the point that the book becomes surprisingly predictable by the time that Auden gets trotted out once again in order to introduce a new concept, as here in the essay “Childhood’s End: An African Nightmare,” in which Auden’s work is used affectingly in making a journalistic (and moralistic) point about the Ugandan Army’s practice of kidnapping children into military service:

“It must be nightmarish to know that any feral-child terrorist who is shot could be one of your own. ‘I and the public know,’ wrote W. H. Auden in perhaps his greatest poem, ‘September 1, 1939’:

What all schoolchildren learn,
Those to whom evil is done
Do evil in return.

“And that’s what makes it so affecting and so upsetting to watch the ‘night commuter’ children when they come scuttling and scampering into town as the sun departs the sky. These schoolchildren have not yet had evil done to them, nor are they ready to inflict evil. It’s not too late for them, in other words.”

Arguably—which is perhaps at once the wittiest and most apt title of the season—is a work comprised of many parts, with titles ranging from “Eclectic Affinities” to “Legacies of Totalitarianism” (certainly direct, but the least creative title) to “Word’s Worth,” in which we find in intensely pleasing autopsy of the upper crust, and issuers of what novelist Joyce Carey (author of the splendid The Horse’s Mouth) referred to as the “tumbril remark” (the sort of “Let Them Eat Cake” comment that might well have cost one one’s head during the French Revolution). Lovingly, Mr. Hitchens opens the essay (entitled “Let Them Eat Pork Rinds”) with ex-First Lady Barbara Bush’s conclusion that, for those who were displaced to Texas by hurricane Katrina, “this is working very well for them.”

This is Christopher Hitchens at his acid best. And those well familiar with his work will find that the section called “Offshore Accounts” contains the material with which he is most often identified—world events. Here are the essays on the Middle East that will provoke a strong response—positive being every bit as likely as negative—on events in the Middle East  from Iran, Iraq, Lebanon, Afghanistan, and Israel, to countries as far flung as Tunisia, Uganda (see above), Vietnam, and Germany), although there is likely no corner of the world about which Mr. Hitchens does not get worked up at least to a simmer.

To this reader’s thinking, however, Mr. Hitchens it at his best when stewing over nothing. When he turns his attention to the final book in the Harry Potter series (“every time the secret police close in, our heroes are able to ‘disapparate’”) or when, in his essay “Wine Drinkers of the World, Unite” he achieves a level of Seinfeldian hysteria over that waiter who pours the wine unbidden: “Not everyone likes wine as much as I do. Many females, for example, confine themselves to one glass per meal or even half a glass. It pains me to see good wine being sloshed into the glasses of those who have not asked for it and may not want it and then be left standing there barely tasted when the dinner is over. Mr. Coleman, it is said, made his fortune not from the mustard that was consumed but from the mustard that was left on the plate.”

Ah, but there is the other side of the coin as well. Concerning the same females who will not drink their fair share of the wine, he also notes, in “Why Women Aren’t Funny,” that they are indeed (as Jerry Lewis famously pointed out) not funny. Getting himself all wound up on the subject, he writes:

“The chief task in life that a man has to perform is that of impressing the opposite sex, and Mother Nature (as we laughingly call her) is not so kind to men. In fact, she quips many fellows with very little armament for the struggle. And average man has just one, outside chance: he had better be able to make the lady laugh. Making them laugh has been one of the crucial preoccupations of my life. If you can stimulate her to laughter—I am talking about the real, out-loud, mouth-open-to-full-horseshoe-of-lovely-teeth, involuntary, full, and deep-throated mirth; the kind that is accompanied by a shocked surprise and a slight (no, make that loud) peal of delight—well, then, you have at least caused her to loosen up and to change her expression. I shall not elaborate further.”

Nor shall I. Except to note that, in this single piece, Mr. Hitchens manages to be both patronizing and misanthropic, which is quite an accomplishment.

At his best, Christopher Hitchens can take his reader with him, not only into parts of the world that have heretofore been untrodden, but also into the dark, sensuous, and obsessive recesses of his mind. From here spring “As American as Apple Pie,” his paean to oral sex (“Why do we still say, of something boring or obnoxious, that ‘it sucks?’ Ought that not to be a compliment?”) and “So Many Men’s Rooms, So Little Time,” an appreciation of what, in polite society, as been referred to as a “tea room,” otherwise known as the public men’s room, with special attention given to Senator Larry Craig.

When Mr. Hitchens sneers, his readers laugh. When, however, he seeks to enlighten, as in the dreary essay “The New Commandments” (although with Biblical roots seems to bring out the worst in him), or with any number of his literary reviews.

With nearly 800 to play around with, it is safe to say that any reader will find something to love and a good deal to like. It is also safe to say that the thing could have been edited down, lost 300 pages, and still have been a long and satisfying read.

A final note: sadly missing from this volume are the essays that Hitchens wrote recently for Vanity Fair describing his own battle with cancer. In that he brought the same clear and unflinching reporting to the story of his own—perhaps losing—battle for his life, these are among the finest things he has ever written. But although Arguably contains recent material (some as recent as May 2011), these are not contained herein. It is hopeful that they will find print in another volume.