Are We Winning?: Fathers and Sons in the New Golden Age of Baseball 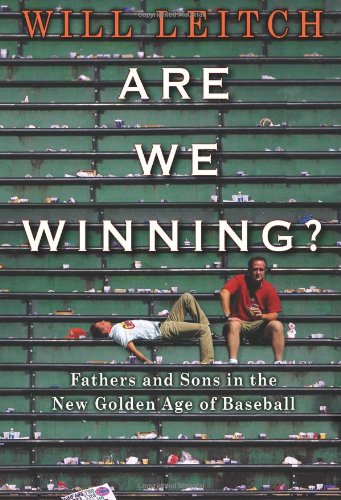 I only recently learned that my father played second base when he was in Little League; I was, justifiably, cordoned off in left field. My son is a lefty who has played left, right, and center fields, first base, and pitcher. To the casual observer this would seem nothing more than a laundry list of adolescent, familial recollection, good for genealogy or holiday story telling.

Will Leitch tells the underlying story much better than I can. He gets it, as do countless fathers and sons in America. We are a nation of sports fans, of hopefuls and also-rans, of nostalgia and wanna-bes. Are We Winning?: Fathers and Sons in the New Golden Age of Baseball is a fun, insightful glimpse through the looking glass of our national pastime, a tug on the thread of the seam that binds men and boys in a way few other things can.

This reviewer is nowhere near the die-hard, hardcore baseball fan Leitch is, but if you grew up playing baseball—no matter how long ago—you’ll completely understand the vein from which he bleeds; if you’re a father you’ll have a profound appreciation for the narrative. Stats can be telling, but sterile—Are We Winning? is nothing of the sort.

This reviewer is not certain if Leitch meant the book as a covert homage to his father, but its pages leave us wanting—as apparently many people do—to buy him a beer. For that matter, to buy Will and his father a beer. Interspersed between half-inning play-by-play commentaries are yarns about family and friends, about how the game has become ingrained in the fiber of his being—a micro-view of every father/son duo who enjoy or love the game. Even his good friend Mike is doing his utmost to raise his son to be a Cubs fan, something the Leitch family abhors as staunch Cards men. But they wholeheartedly support nurturing a love for baseball.

Team loyalties aside, the game has a quality which reaches beyond the fans’ presumption of perceived ownership that flows through the life-blood of one generation to the next. Will Leitch does a wonderful job of exploring this notion by painting vignettes with the characters from his life using the palette of his own childhood and early adult experience to stroke the canvas. The result is often funny, sometime laugh-out-loud hilarious, and often filled with the kind of silent affection fathers and sons have for one another but can’t or won’t express.

At Chase Field (home to my Arizona Diamondbacks) there once hung a large picture of a father and son in silhouette at a ball game. They were standing, apparently cheering the play unfolding beneath them on the field. In the lower right corner was the inscription “Dad-1, Video game-0.” For scores of fans, fathers and sons, commoners to stat freaks, that inscription distills the essence of this book: Even if your team loses, a day at the ballpark with your son/father is a win.