The Arc of a Covenant: The United States, Israel, and the Fate of the Jewish People 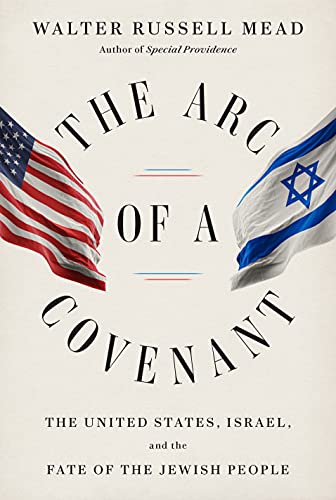 “The biggest takeaway from Mead’s book is that for better or worse U.S. domestic politics have played and still play an outsized role in shaping America’s approach to Israel and Middle East policy in general.”

Why does the state of Israel, which is “a speck on the map of the world,” occupy “a continent in the American mind”? The Hudson Institute’s Walter Russell Mead attempts to answer that question in his new book The Arc of a Covenant by identifying and assessing the historical and cultural “attitudes and ideas” that have shaped American perceptions of Zionism and U.S.-Israeli relations.

Mead rightly insists that U.S. attitudes about, and policies related to, Israel have shifted significantly since Israel became an independent country in 1948. He convincingly argues that American foreign policy toward Israel has been shaped by many factors, including religion, culture, ideology, and domestic politics. And he puts the lie to the widely held belief that U.S. foreign policy in the Middle East has been and is driven by influential American Jews who supposedly exercise enormous influence in Washington.

Mead places America’s Israel policy in the context of its overall foreign and national security policies. He notes that President Harry Truman formally extended recognition to the new state of Israel over the objections of almost all of his defense and foreign policy team. And it was not the United States, but Joseph Stalin’s Soviet Union that helped Israel achieve its independence.

Stalin had no love for the Jewish people--before his death he was planning a pogrom against Soviet Jews. Stalin supported Israel in an effort to sow division in Anglo-American relations. And throughout the 1950s and much of the 1960s, Israel’s most important Western ally was France. The 1967 Six Day War changed that. Israel’s stunning and decisive victory in that war over its Arab enemies convinced Washington that Israel could be an important strategic ally in its Cold War competition with the Soviet Union for influence in the Middle East.

The Soviets backed Egypt’s Gamal Abdel Nasser, but Israel defeated Egypt, Jordan, and Syria in 1967 and occupied the Sinai Peninsula, the West Bank of the Jordan River, and the Golan Heights. And, suddenly, those Arab powers and other countries around the world took up the cause of an independent Palestinian state. Meanwhile, the U.S. grew closer to Israel.

But as Mead points out, it was President Richard Nixon during the 1973 Yom Kippur War who began viewing Israel as a strategic partner in the Middle East. Nixon authorized a crucial airlift of supplies to Israel that enabled the Israeli army to turn the tide of that war, and it was the Nixon administration who began the diplomatic efforts after the war that later bore fruit in the Camp David Accords.

Historians and presidential scholars often give President Jimmy Carter credit for the Camp David agreement that established peace between Egypt and Israel. Not so, writes Mead. Carter, he writes, turned away from the Nixon policy of promoting peace between Egypt and Israel, and tried instead to facilitate a comprehensive Middle East peace that would include the Soviet Union. Thankfully, Egypt’s President Anwar Sadat took matters into his own hands by dramatically traveling to Jerusalem to effectuate Nixon’s plan.

Prior to Camp David, Israel, Iran (under the Shah) and Saudi Arabia became strategic pillars of the “Nixon Doctrine” as applied to the Middle East. And Nixon’s policy effectively ended Soviet influence in the region because all of the Arab and Muslim countries in the Middle East knew that only America could “lean on” Israel to make concessions for peace.

The 1967 and 1973 Middle East wars also witnessed a gradual change in U.S. domestic politics regarding support for Israel. The left in America began viewing Israel as an “occupying” and “imperial” power and expressed sympathy for the Palestinian people and supported the creation of a Palestinian state. Conservatives, however, soon became Israel’s greatest champions in the United States—for both religious and strategic reasons. This was especially so among Evangelical Christians and neoconservatives.

After the Cold War ended, Mead explains, both Presidents George H. W. Bush and Bill Clinton attempted to revive Israeli-Palestinian peace talks, believing that a settlement between those parties would result in lasting peace in the region. Mead points out, however, that this notion was a chimera. Yet U.S. foreign policy made an Israeli-Palestinian peace settlement the focus of our Middle East policy. Until the attacks on 9/11.

The 9/11 attacks by Islamic terrorists temporarily ended the evenhanded approach to Israel and its Arab neighbors. But those attacks and the subsequent war on terror launched by President George W. Bush and continued by President Obama also distracted America’s attention from the rising power of China and its gradual alignment with Russia on the Eurasian landmass. That was a terrible geopolitical mistake.

Mead in fact has little good to say about Bush or Obama when it comes to their Middle East policies. Bush foolishly tried to “democratize” the Middle East, while Obama promoted the so-called “Arab Spring” to reform the region’s autocracies. “The idea that the region was on the verge of a liberal political transformation,” Meade writes, “was a dazzling daydream produced by an American policy community intoxicated on liberal ideology and post-historical triumphalism.” And the Bush and Obama policies triggered a revival of Russian influence in the region.

Mead also has little good to say about President Trump, though he grudgingly gives him credit for the Abraham Accord—in which the United Arab Emirates, Bahrain, Sudan, and Morocco agreed to normalize relations with Israel—and for his more hawkish approach to China. He attributes Trump’s pro-Israel policies to domestic politics, yet he notes that they did not significantly affect the overwhelming support among Jews for the Democratic Party.

The Middle East remains an important geopolitical region, but it is less important than the Indo-Pacific. Israel remains an important American ally, but other allies are more important. The biggest takeaway from Mead’s book is that for better or worse U.S. domestic politics have played and still play an outsized role in shaping America’s approach to Israel and Middle East policy in general. And, as Mead concludes, “there is no sign that Israel will lose its place in the limelight” of American and world politics.