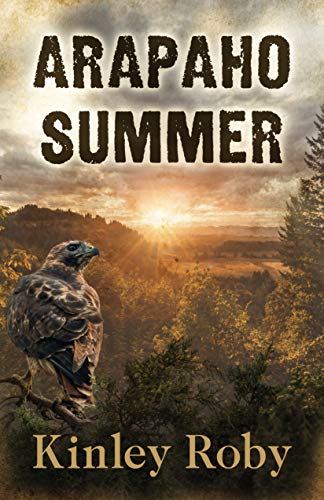 “Arapaho Summer provides a constant stream of adventures woven through with romance and idealism.”

Stories abound about settling the American West via the Oregon Trail. Many books and films cover the early days of that era, when the trail was being broken by pioneers and followed by wagon trains.

In Arapaho Summer, set after the Civil War, the Oregon Trail is “not a trail at all but a miles-wide scattering of wagon wheel tracks,” along which “broken wagon wheels, pieces of furniture, and sometimes entire abandoned wagons lay scattered in the grass.”

Also by then maps had been made, alternate routes and shortcuts figured out, and forts or other resources established as waypoints. It’s therefore comparatively easy for a party on horseback with pack mules to leave later in the year than the wagon trains, and to reach the fine valleys of Oregon faster.

“Faster,” nonetheless, involves many months, and the characters in this novel consume the complete summer of title to get there just in time. On the trail they encounter the same hazards as their predecessors—hostile natives and renegade whites, difficult terrain and deadly weather—along with fellow settlers, fur traders, buffalo hunters, soldiers, scalawags, and thieves.

Captain Caleb Stone was a hero in the Civil War on the Union side, grievously injured in a battle that influenced the war’s outcome. When he emerges from his service, he has nothing to go home to and so, disillusioned, he cashes out his farm in Maine and heads west to find purpose.

He’s accompanied by Dil Smith, who nursed him through recovery and seeks his own new beginning and identity. Dil’s war experience cost him an arm and most of his memory, leaving two lost souls together to find themselves.

On the trail they rescue other lost souls: two Arapaho women held as slaves by Lakota Sioux, an orphaned white boy captured by Mormon raiders, and a half-dog wolf wounded by a grizzly bear. These have nowhere else to go so they join the men on their journey.

Each brings special skills to the team that lets them escape many mishaps. Those mishaps combined with the travails of long, harsh, overland travel create steadfast bonds. Caleb and Dil fall in love with the Arapaho women, White Cloud and Little Rain; and all fall in love with young Foster. Both couples desire to adopt him once they reach Oregon and marry (if they get there). The half-dog, Wolf, adopts them all as his pack and has frequent opportunities to protect them.

Their story is told from Caleb’s perspective in plain writing suitable for readers preteen and up. Unlike longer and more literary styled novels about the period, it keeps to the surface, telling us yeah, the road is long and hard and painful without detailing the filth, the exhaustion, and the suffering.

It particularly avoids gore, which is unsettling given the amount of hunting and killing that occurs. In that regard the story resembles some Hollywood films, where people running on foot or galloping on horseback never miss a shot at moving targets. Indeed, the speed with which this book’s characters learn to shoot, do so without missing (even in motion, in bad light), learn each other’s languages, adapt to each other’s customs, build structures, and rebound from injuries often feels implausible.

But the story holds true to historical accuracy about the land it crosses and the events, conditions, and peoples of the time. Many of the conflicts between cultures and sexes that were active back then continue to this day. Modern readers can take the characters in Arapaho Summer as role models. They tackle racism head-on and treat everyone respectfully. Instead of declaiming others’ religions and cultures, they accommodate or assimilate them. In this story women are equal to men, and many times they are stronger, physically and/or psychologically. All the adult characters give responsibility to children while protecting and teaching them. They regard animals as worthy as people, too.

Altogether, Arapaho Summer provides a constant stream of adventures woven through with romance and idealism. It teaches us much about how a young USA spread across its vast holdings, which were won with blood that never quite appears on the page.