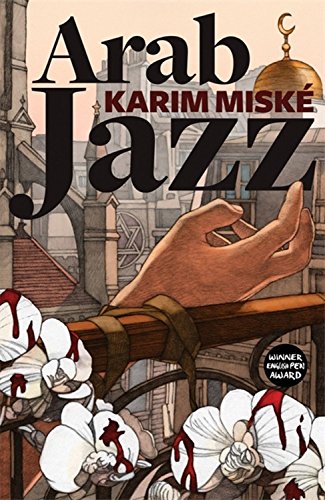 The 19th arrondissement in Paris is a cosmopolitan melting pot district where multicultural citizens live, love, and worship alongside one another, enjoying Kosher sushi and kebabs, and different strands of each other’s culture; however, sometimes love can be substituted with hate. . . .

A sufferer of depression, bibliophile, and aficionado of crime and pulp novels, French Arab Ahmed Taroudant is daydreaming his life away on the balcony of his apartment while gazing out at the comings and goings of the inhabitants of the 19th. When he’s not jogging and buying books from Monsieur Paul, owner of the second-hand bookshop. Ahmed is in constant reading mode, in an effort “to lose himself by devouring the whole world in a single, uninterrupted story written by others.” Unexpectedly, his daydreaming is brought to an abrupt end when what he believes to be drops of rain begin falling onto his face:

“And so it is in the Valetta of Paris, 75019, that he feels the first drop on his upturned face, his half-closed eyes gazing up at the sky. The second comes crashing down onto the gleaming sleeve of his djellaba, a present from his cousin Mohamed. Ahmed looks down and watches the scarlet stain spread across the white cotton. It’s not rain. A third tear strikes him on the end of his nose. He tastes it. It’s blood. His eyes slowly move upwards, as if they know the sight that awaits them. A motionless foot is hanging two metres above him.”

Instinctively or intuitively he now believes the bloody foot belongs to his upstairs’ neighbor, frequent flyer Laura Vignole, an air stewardess, and from the way the foot is protruding, she is dead. He has little or no doubt about that. Too many crime books have given him the talent of spotting the dead.

Almost immediately, the same accumulation of crime books he has devoured over the years begins to kick-in alongside paranoia, real or imagined: the racist cops and neighbors will try to pin this on him, a Muslim—even a non-practicing Muslim such as he—alone, reading books all day, living directly below the victim; a Muslim who has been in her apartment daily, and carries the only spare key to the very door of the victim because he watered her flower when she traveled. And not forgetting his fingerprints, hairs, and every other assortment of DNA clues pointing accusingly at him from everywhere in the apartment, screaming HE DID IT!

Quickly making his way upstairs, Ahmed discovers Laura’s door ajar. He steps inside. Despite his clothing already being speckled in the victim’s blood, he is careful not to touch any blooded areas. The books of noir and crime have taught him well on how never to leave a clue. Despite the danger and possible repercussions, he needs to see for himself if the nightmare scenario buzzing in his head is true, or if it’s just a figment of an over fertile imagination, a mind habitually stepping in and out of reality in the psychoanalyst sessions he attends.

Unfortunately, it is true. The nightmare for Ahmed has just come true. A meal for two has been carefully arranged, like a setting for a stage play. Laura’s beloved orchids, which he attended to when she was away, have had their heads decapitated. Gruesomely, out on the balcony, her body is sitting upright, bound and gagged, almost ritualistically. She is naked, except for a crimson T-shirt, probably caused by blood saturation. There is also an enormous gash from her belly down that has now stopped dripping blood onto Ahmed’s balcony. An uncooked joint of pork has been left conspicuously near the body like a grotesque question mark.

The pork makes him hesitate. Is it some sort of anti-religious symbol? A hidden message written in blood? Has he walked into the perfect trap, the murder by a killer seeking to kill two birds with one stone?

He knows it won’t be long before the cops come to question then arrest him. But when the detectives eventually do come, they come in the shape of two very unusual individuals: Lieutenants Rachel Kupferstein, a secular Jew, and Jean Hamelot, a Breton Communist and lapsed Catholic who likes to quote Goebbels, of all people.

Despite Ahmed’s worse fear of corrupt cops setting him up for the fall, Kupferstein and Hamelot come to the conclusion that Ahmed is not the guilty party and come up with their own list of possible suspects.

The whodunit quickly evolves into a whydunit as the story spans from Paris across the Atlantic to New York in search of drugs and religious fanatics, revealing more surprises, twists and turns.

Arab Jazz is a stunning début, intelligent and highly original, featuring a smorgasbord of memorable characters and events. Don’t be surprised if, after this adventure, Lieutenants Kupferstein and Hamelot end up getting their own series. If they don’t, it surely would be a crime.