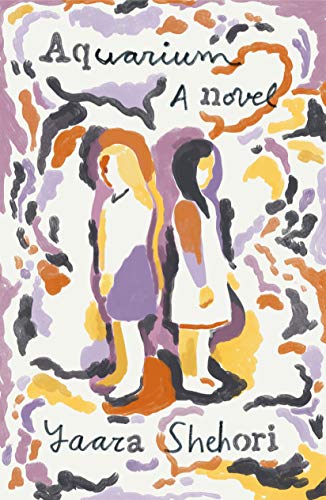 Yaara Shehori’s novel Aquarium follows the lives of sisters Dori and Lili Ackerman, apparently deaf children being raised by deaf parents in relative poverty in a nameless country in some undetermined period which might be the second half of the 20th century. The family lives first in an apartment block in the city; then, fleeing from state scrutiny, they move to the rural margins. The girls are theoretically home-schooled but functionally run wild, ignoring their fragile mother in favor of worlds they create for themselves.

Community arrives first with the father’s deaf brothers, a pair of unmarried and apparently ancient uncles who give inscrutable gifts. Fellow apartment dwellers perceive the girls as “nocturnal demons, mythological creatures who were doomed to make a little noise and then sink to the watery depths.” Their deaf neighbour Uriel’s hearing aids render him an unsuitable companion: “His arms moved mechanically as if they were made from metal, and their father nodded at him: ‘The Boy is a lost cause. They made him a robot.’”

These early pages are haunting, under constant pressure. The sisters’ strangeness and the hostility of the neighbors creates a powerful sense of unease; however, the novel shifts setting to the countryside, where the family develops a soundless cult following that ultimately leads to state intervention, which in turn sends the girls on different paths.

At this point, the novel loses its way. Dori and Lili’s bond breaks down as they’re separated, and with it the literary tension they emit. Their lives become gradually ordinary, haunted by the past but unable to move into a functional future. In this state of suspension, Dori and Lili both begin to speak aloud, but they communicate with their new societies through symbolic gestures and abstractly philosophical discussions.

These discussions suggest deep meaning but ultimately offer little insight. Profundity and absurdity compete for the characters’ attention, often leaving the reader at a loss. Dori at university “woke up when the class was already at its height and on the whiteboard was written: The present King of France is bald. Against her will she imagined him, the exiled king, bald and red-eyed, even though she had already been told that there was so point in imagining something without a referent.”

This kind of reflection on language and meaning has strong connections to sign language’s insistent presence in the novel’s first half, but the link seems to exist for its own sake. Perhaps all languages lack referents. Perhaps all communication, all meaning, is fundamentally arbitrary, preventing people from truly knowing one another except in the revelatory moments of childhood. It’s an intriguing idea, but not one that easily sustains a plot. The characters make symbolic gestures that fail to connect, revealing the failures of language but likewise revealing the limits of fiction to progress without resolvable conflict or narrative plot. The conflicts present by mid-novel are fundamental ones; they can’t be resolved without transforming all of human cognition.

Though one might assume the girls live in Israel (since Shehori does, and since the novel has been translated from Hebrew), there are no gestures within the text to any specific political, cultural, or religious context. Aquarium’s style echoes that of central European literature in the mid-to-late 20th century: characters with complex but abstract problems engage in long, philosophical discussions uninterrupted by quotation marks or the nuances of national politics and history. At its best, it’s an approach which can illuminate fundamentals of the human condition, but more often, as here, it reveals futility of extrapolating from a single, limited set of experiences.

Yaara Shehori is a distinguished editor and an award-winning writer, considered a literary treasure in Israel. It seems likely that Aquarium is a book which has suffered in translation. Even if the transitions of language are relatively “true,” there may simply be insurmountable gaps of meaning and culture that prevent this novel’s brilliance from emerging in English.