The Approaching Storm: Roosevelt, Wilson, Addams, and Their Clash Over America's Future 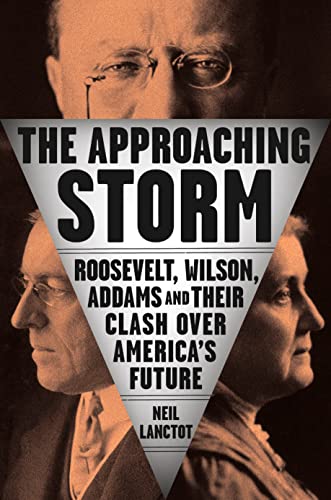 “The real strength of The Approaching Storm is not its colorful and well-drawn supporting cast but the three pivotal figures at its center, who provide a remarkably revealing lens for viewing the unrelenting internecine conflicts that roiled the American home front during World War I and well into the years beyond.”

The always colorful and often quotable Alice Roosevelt Longworth, first-born daughter of Theodore Roosevelt, who inherited a healthy share of her father’s thirst for attention and inimical talent for stirring the pot, famously quipped, “My father always wanted to be the corpse at every funeral, the bride at every wedding, and the baby at every christening.”

Perhaps Roosevelt’s greatest desire, though, was to be the answer to every question and the solution to every problem, which made him one of America’s greatest and most dynamic presidents, and also one of its most nettlesome, cantankerous, and sometimes delusional ex-presidents, particularly when Europe became embroiled in the Great War, and the actual president of the United States, Woodrow Wilson, determined to keep America out of it—at least as far as the military was concerned. (Our critical and exceptionally profitable industrial involvement was another story.)

Neil Lanctot, author of the finest recent book on the history of baseball’s Negro Leagues, delivers a lively and enthralling look at the war at home that raged over the three years the United States steered clear of overseas military entanglements during World War I, focusing on three of its most prominent and potent combatants: Roosevelt (“The Rough Rider”), Wilson (“The Scholar”), and Jane Addams (“The Reformer”), pioneering social worker, suffragist, and pacifist.

As the book begins amid the tumult of the 1912 Democratic and Progressive Party conventions, one is hard-pressed to find a great deal of daylight between the political positions of these three iconic figures, all progressive reformers, albeit with Wilson self-identifying as a “progressive with the brakes on,” a notion that would make Roosevelt, by comparison, look like a bull moose in a China shop.

Lanctot expertly sets the stage for the conflicts and shifting alliances to come, beginning with Addams’ seconding speech (first ever by a woman at a national convention) for Roosevelt’s nomination as the Progressive Party’s presidential candidate. Roosevelt’s rowdy campaign—largely launched in protest of GOP regulars who had allegedly conspired to throw the party’s nomination to incumbent William Howard Taft despite Roosevelt’s groundswell of popular support and success in the (non-binding) primaries—would predictably split the GOP vote and throw the election to Wilson. The ever-pragmatic Addams still saw the election as a victory for the progressive cause, Lanctot writes: “The real winner, she sensed, was progressivism, and reformers confidently expected more gains in their social justice agenda in the future.”

Though relatively cordial in person, Wilson and Roosevelt rarely had a kind word for each other in the press or in correspondence with others. Though Roosevelt became a relentless and frequently insulting critic of the president in during Wilson’s first five years in the White House, Wilson most likely took the first potshot on February 2, 1902—in the wake of Roosevelt’s much-maligned decision to invite Booker T. Washington to dinner at the White House, and his controversial appointments of Black candidates to a handful of minor federal posts—when he told a Princeton University audience that the groundhog hadn’t left his hole that day “because he was afraid Roosevelt would put a coon there.” More famously, in the waning years of Roosevelt’s presidency, Wilson told a reporter that Roosevelt “no sooner thinks than he talks,” and described TR to a friend as “the most dangerous man in public life.”

Though much of Roosevelt’s contempt for Wilson stemmed from the 1912 election results—though his real beef was with the “burglars” of the GOP establishment—deep and irremediable conflicts emerged as the current and ex-president found themselves on opposite sides of the question of American preparedness for and participation in the war. As Roosevelt emerged as the most prominent advocate of the United States joining the fray on the side of allies England, France, and Italy against Germany and the central powers, the same issue drove a wedge between Addams and Roosevelt as well, as Addams planted both feet staunchly in the pacifist camp. Roosevelt’s aggressive attacks on the allegedly suspect loyalties of “hyphenated Americans” and personal attacks on Addams’ own writings and the “Jane Addams-inspired idiots” of the Women’s Peace Party left little room for their former mutual admiration to survive after the war began.

While Addams and Wilson saw eye to eye on the US involvement in the war as long as his “too proud to fight” position held, Wilson’s indifference to the women’s suffrage issue—which he saw as a minor state-level concern—she regarded as essential to any actual advancement beyond militarism in US policy—made theirs an uneasy alliance.

The Approaching Storm brings together a fascinating array of characters, foremost among them Wilson’s invaluable (though ultimately excommunicated) right-hand man, Colonel Edward House, whom Wilson described as his “second personality”; German ambassador Johann von Bernstorff, a level-headed advocate for American neutrality and reduction in hostilities, sometimes in opposition to orders from home, as German U-boat attacks on the Lusitania, Arabic, and other ships made that increasingly unlikely; the “Hungarian force of nature” Rosika Schwimmer, a “militant feminist and hard-core atheist” and radical advocate for peace; William Monroe Trotter, a Boston-based Black newspaper editor, whose unflinching confrontation with Wilson over his re-segregation of government offices found the president uncharacteristically losing his cool and showing his roots; the Great Commoner William Jennings Bryan, appointed Secretary of State as a sop to the Democratic old guard and often a thorn in Wilson’s side; James Norman Hall, an American volunteer in the British army ranks who kept revealing (and soon-published) war diaries and went on to co-author the magnificent Bounty Trilogy with British-born writer Charles Nordhoff; fearless suffragist Alice Paul, who refused to be “bamboozled” by the calls for patience and multi-issuism that had sunk 19th-century efforts to bring women the vote; 1916 Republican presidential nominee Charles Evans Hughes, the “bearded iceberg” who drew tepid support from Roosevelt and did little to obstruct Wilson’s re-election; Wisconsin progressive senator and “champion filibusterer” Fighting Bob LaFollette, whose resistance to an unquestioned alliance with England over Germany in some ways epitomized the differences between the midwest and more pro-war eastern seaboard in this era; outspoken pacifist Henry Ford, who lavishly sponsored the ill-fated 1915 volunteer “Peace Ship” mission to Europe on the Oscar II, but generally fell woefully short of his financial promises to the pacific cause, as well as his 1915 guarantee that he would have all the warring armies home by Christmas; and Montana congresswoman Jeanette Rankin, who became the only U.S. legislator to vote against U.S. entry into both world wars, and at least temporarily, “eclipsed Addams as the most high-profile woman in America.”

But the real strength of The Approaching Storm is not its colorful and well-drawn supporting cast but the three pivotal figures at its center, who provide a remarkably revealing lens for viewing the unrelenting internecine conflicts that roiled the American home front during World War I and well into the years beyond.