The Apprentices (The Apothecary Series) 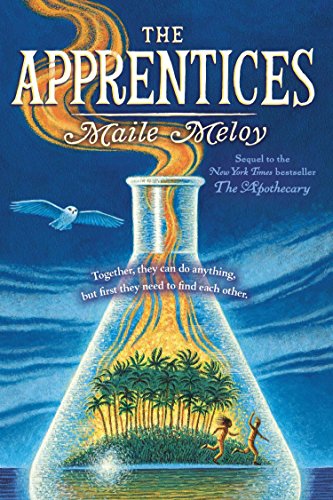 “The magic of this book is dazzling: an elixir for invisiblity, champagne bubbles for forgetting, and the surprising twist at the end.”

When Janie comes home from Hollywood High she eats an orange off the tree in her yard. World War II, the war to end all wars is over. Nineteen-fifty-two is an ideal time to be a 14-year-old until . . .

In hopes of escaping the McCarthy investigation, her parents decide to move from California to London. Janie finds it impossible to be graceful about her parents’ decision, but she allows herself to think, it might be an adventure.

Janie’s first day at St. Bedens school, built in 1880, offers many more difficulties than the usual problems of changing schools in the middle of the year. A school uniform with pleated skirts is required. All the academics look like black bats in their black gowns. Can a dreamy Latin teacher actually be a Soviet spy?

Janie and her father shop for hot water bottles in the mysterious apothecary and she recognizes Ben, a fellow student from school who enjoys confrontations with teachers. His goal is to become a spy. Could this be the apothecary’s son?

Tension mounts when the apothecary and his son Benjamin have some crazy idea about deleting radiation from an atomic bomb by freezing time. Would it actually be possible to turn scientists into salt? Janie and Benjamin discover potions and attempt recipes from the Pharmacopoeia, but this sacred book has a habit of disappearing. Their worst fear is that it will fall into the hands of the Russians who seem to be around every corner. When Benjamin’s father is kidnapped, the teenagers put themselves into dangerous situations in an effort to prevent disaster.

A fast paced mystery with magic potions, truth serums, kidnapped fathers, and Pip—straight out of Dickens—The Apothecary keeps the reader engrossed. Think of a cross between Harry Potter and Nancy Drew. The magic comes in second to their blossoming relationships.

The black and white illustrations by Ian Schoenherr help set the stage for exciting adventures. The magic of this book is dazzling: an elixir for invisiblity, champagne bubbles for forgetting, and the surprising twist at the end.