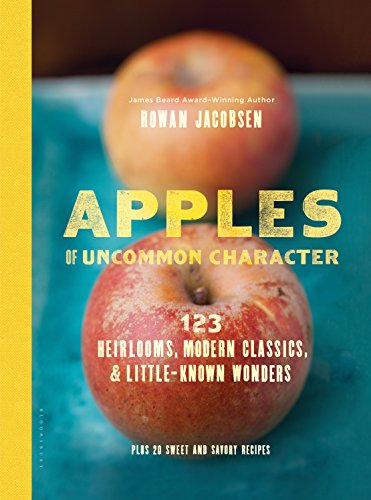 “Take a bite out of this book to experience the wide and wonderful world of apples.”

A fascinating topic and beguiling writing style make for a winning combination in Rowan Jacobsen’s Apples of Uncommon Character.

The shank of the book is profiles of apple varieties organized by the fruit’s usefulness. You’ll find a section on summer apples (early ripeners), of which Jacobsen writes, “The window between ripe and rot can be so narrow that you are advised to stand under the three and eat them before they know they’ve been picked.”

Introducing dessert apples, he says, “Dessert apples perform solo and unplugged, with no backing from spices, ovens, or presses.” Jacobsen explains that bakers and saucers (candidates for apple sauce and other cooked recipes) should be dense and acidic, two properties that make them more refreshing in a sugary dessert and allow them to retain more firmness.

Keepers, those apples that improve with aging, are a rarity since the 1960s when commercial apple growers learned controlled ways to store and preserve the mass-produced apples such as Red Delicious, a reality Jacobsen laments, saying, “. . . the flavor of an ‘aged’ Arkansas Black is something no brand-new apple will ever have. Those flavors, once eagerly anticipated by generations of farm children, have disappeared from our modern table. ”

Then there’s the cider fruit, the apples that when pressed and aged make a delicious, nuanced alcoholic beverage. Jacobsen celebrates the recent renaissance of cider making in the United States, explaining that the bitter, acidic cider apples cultivated for centuries create drinks that, “. . . combine the best qualities of white wine, red wine, and beer, while resembling none of them.”

His last apple category is Oddballs, such as Sheepnose and Winter Banana. As Jacobsen explains, some apples survive and are treasured by sheer dint of their weirdness.

The book concludes with recipes featuring apples. Each comes with Jacobsen’s recommendation for the best apple variety for that use. In his recipe for Grilled Apples with Smoked Trout, Fennel, and Lemon Zest, Jacobsen recommends Honeycrisp, Jonagold, Gala, Rhode Island Greening, Karmijn de Sonnaville, Esopus Spitzenberg, or Newtown Pippen. Extoling the delicious flavor of this appetizer dish, he refers to it as “a killer app.”

Harrison, a cider apple first grown in Newark, New Jersey, from around 1712, has an engrossing history. This apple produces a particularly Champagne-like cider. By the early 1800s, Newark was famous for Harrison’s Sparkling Newark Cider. Jacobsen writes, “. . . Newark cider makers had adopted a style so similar to Champagne, that their product was often called Newark Champagne and was sometimes passed off as the pricey French import, a controversial practice that prompted one critic to label it ‘sham-pagne.’”

The Newtown Pippen is an apple that has influenced international relations. Discovered in 1720 growing in the orchard of Gershom Moore in Newtown (now Elmhurst in Queens), New York, the apple’s popularity quickly grew as people learned about its superior flavor and unparalleled keeping abilities. Both Thomas Jefferson and George Washington praised the Newtown Pippin, also known as Albemarle Pippins after Albemarle County, Virginia.

Jefferson grew it in Albemarle County at Monticello. Benjamin Franklin received a shipment of Newtown Pippins when he was staying in London in 1759. The British loved the apple and tried to grow it, but it never performed properly there. To protect their local market, England slapped a tariff on all apple imports. Even at highly inflated prices, the Pippins sold well as “Pippin Mania” took hold.

A second round of “Pippin Mania” broke out in 1838 when America’s ambassador to the United Kingdom gave the 18-year-old Queen Victoria a basket of the Newtown Pippins. Ambassador Stevenson’s wife wrote, “They were eaten and praised by royal lips and swallowed by many aristocratic throats.” So besotted was the young queen with this tasty apple variety, she waived the apple tariff on that variety alone.

Apples grown from seed do not come true to the parent (grafting is the only way to make an exact genetic replica), meaning that every apple seedling is a new apple variety. It is up to the farmer to decide which are worth keeping for propagation.

A hundred years ago, there were as many as 17,000 named apple varieties in the United States. That number dwindled rapidly in the 20th century, first with Prohibition that made cider apples taboo, then with the rise of industrial-scale orchards that were looking for uniform apples that ship well.

Jacobsen says, “Of those thousands of nineteenth-century varieties, a mere six (Red Delicious, Golden Delicious, Gala, Fuji, Granny Smith, MacIntosh) came to dominate the late-twentieth-century market. Not long ago, three-quarters of the apples grown in America were Red Delicious, an apple bred for its intense red color at the expense of texture and taste.”

Today America is enjoying a renaissance in apples with long-lost varieties being rediscovered and propagated, bringing greater diversity and choice to consumers. Jacobsen’s book celebrates this trend, providing detailed information about the appearance, flavor, texture, season, use (cider, eating, pies, sauces), and history of 123 apple varieties.

Beautifully illustrated with photography by Clare Barboza, this is a book that you will want to refer to often. As Jacobsen writes, “. . . you will get a sense of the many things an apple can be, the many roles it can play in our lives. If there is one particular lesson the apple has to teach us, it is that the world is ripe with possibilities.” Take a bite out of this book to experience the wide and wonderful world of apples.