The Apocalypse Factory: Plutonium and the Making of the Atomic Age 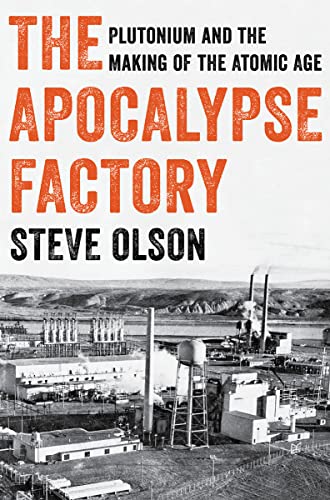 “a solid, valuable work on a critical aspect of America’s wartime quest for an atomic bomb.”

Tens of thousands of workers built the gigantic Hanford Nuclear Reservation whose story is told in The Apocalypse Factory. They had no idea that their secret facility would help end World War II and become “the single most important site of the nuclear age.”

Most readers know about the achievements of J. Robert Oppenheimer and other “exotic” physicists at Los Alamos, in New Mexico. They designed America’s atomic bomb. Science writer Steve Olson recounts another, equally important part of the Manhattan Project. It took place on a sprawling 600-square-mile site in the desert landscape of south-central Washington State. There, in the farming community of Hanford, another group of U.S. scientists—mainly chemists—worked to produce the material used in the weapon.

The material was plutonium, the first element invented by man. Its use made the war-ending bomb highly efficient (and gives explosive power to nuclear weapons to this day).

Beginning with plutonium’s discovery by chemist Glen Seaborg and colleagues at the University of California at Berkeley in late 1940, Olson recounts how the bomb-making material was made at Hanford, in the world’s first full-scale nuclear reactor, then used in the A-bomb test at Trinity, New Mexico, and in the bomb dropped on Nagasaki in August 1945. In accessible prose, he explores all the scientific complexities, offering a vivid picture of the dawning nuclear age.

Hanford was a matter of great urgency and secrecy. Nazi scientists were also working on an A-bomb. “We had to beat the Germans because if they got there first they would win the war,” said one chemist.

Once the site was selected for its isolation and proximity to the waters of the Columbia River, some 1500 residents were forced to leave their homes. Remains were removed from 177 graves. Said a displaced farmer, “We always thought they should have left us there, that peaches were a better crop than atom bombs.”

Scientists worked under aliases. Workers, sworn to secrecy, were under strict surveillance by security officers. Their phones were tapped, their outgoing mail edited. There were ongoing investigations.

Blue-collar workers lived in the nearby bedroom community of Richland, where all land and buildings were owned by the government. The author notes this was several years before the Levitts built their celebrated Levittown on Long Island, making Richland “the nation’s first mass produced suburb,” with 25,000 residents by war’s end.

Olson grew up in the town of Othello, Washington, and had long wanted to write a book about the work at Hanford (he studied writing with John Hersey, author of Hiroshima). He provides sharp portraits of the three men “without whom nuclear weapons almost certainly would not have been ready by the end of World War II.”

They were chemist Seaborg, who told potential recruits, “We’re working on something that’s more important than the discovery of electricity;” the brilliant Italian physicist Enrico Fermi; and Leslie Richard Groves, the “smart, organized, and ambitious” but also “rude, arrogant, and condescending” head of the entire Manhattan Project.

The author details the devastating effects of the Nagasaki bombing, relying chiefly on the experiences and observations of survivor Raisuke Shirabe, a surgeon. “The bomb’s shock wave destroyed virtually every building within a mile and a half of the hypocenter,” writes Olson. An estimated 75,000 people died immediately.

Throughout, Olson considers important questions, from whether the horrific bombing of Hiroshima and Nagasaki were needed to end the war, to the unforeseen problem of the possible adverse health effects of nuclear waste left at the Hanford site. Some 53 million gallons of radioactive waste sit in 177 deteriorating tanks beneath desert sands. Billions have been spent in the attempted clean-up of the decommissioned complex.

This well-researched book can be a bit heavy on science at times for general readers, but it is a solid, valuable work on a critical aspect of America’s wartime quest for an atomic bomb.