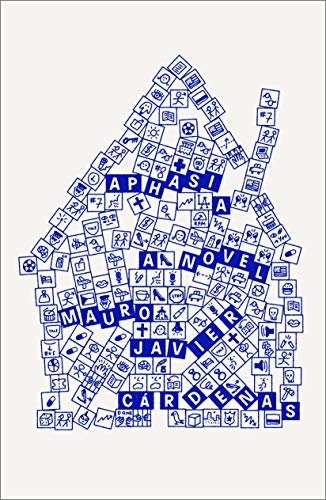 Reading the boldly inventive and fast paced novel Aphasia, is like road tripping through a warm country with your smartest friend; it might be one of the best trips you are likely to take this year.

The distinctive voice of Cardenas, (a native of Ecuador) has hints of Roberto Bolaño with his vivid reportage, but also the sexy worldliness of a Geoff Dyer. Cardenas’ first novel, The Revolutionaries Try Again was hailed as being both “modernist and tender.” Aphasia shares this quality of being formally experimental, (there is no marked dialogue though many strands of dialogue intertwine) while also holding the reader in emotional suspense. It’s a rare combination of elements, a sort of virtuoso performance of form and feeling. It’s exciting!

In choosing to title his novel Aphasia (the loss of speech) Cardenas gives us the first hint of his humor, which is pervasive and wise. Far from being unable to speak, Antonio, the narrator, can do nothing else. He is compelled to tell us everything breathlessly, pointedly, sideways and backwards, with very few periods to slow down the whole polyphonic narration of his life as a hip and educated Columbian immigrant living in LA.

He works at an anonymous tech firm, reads a lot and has a strong addiction to an on-line dating site Your Sugar Arrangements. He tries to keep these liaisons under wraps so as not to interfere with access and visits to his two young daughters Ada and Eva who live with his ex-wife Ida. All of which would be easier if not for the crazy sister (really crazy), his mother, and the heavy backstory of family abuse in the “old country.” But nothing is old here. Even his one night stands form Sugar Arrangements like “Uzi Kitten” are never clichés but actually interesting fully realized characters, who behave unpredictably of course and put his visitation rights at risk.

Playful in many ways, Cardena’s narrator shifts and travels. Each chapter has a title that refers either to Antonio’s personal history such as “When Antonio Was Nicola,” or “When Katerina was Uzi Kitten,” or “Antonio’s Former Wife by Nicola Carati,” which veer into the backstory (or front story?) of the characters around him. A range of characters from the books and movies that Antonio reads and watches appear, cinematic scenes and literary quotes are woven into and merge with the narrative of Antonio’s current life. As he rides BART into San Francisco we get a meditation on Chekov.  In this scene it’s his daughters’ bedtime in LA and he’s been reading Virginia Wolfe.

“The wind sent its spies around the house, they’re summoning you in the other room, Ida says, numbers, Ada says, sparkling water with ice, Eva says what power could now prevent the insensibility of nature Antonio says [in a mock horror voice] lights off one more page, . . . Antonio says if he choses your side of the bed there will be chicken drumsticks for dinner for a week, Ida says, but what after all is one night Virginia Wolfe says . . .”

The works of Borges (of course) Adam Haslett, Gina Berriualt, Nabokov, and Silvina Ocampo also elide into Antonio’s reality, creating this layering of image and dialogue that feels expansive, and rich. The skillful way Cardenas slides from vivid image-to-image, and event to event, as if it were the most natural thing in the world creates a kind of relentless momentum that carries the reader from start to finish without pausing. There is rarely a boring scene here. We feel the density, urgency, and the complexity of lived life.

In the later chapters of the novel the elements of an actual family saga seem to come nearer the surface, Cardenas deftly draws us into the intimacies of his family psychology. Relationships, fathers, sisters, wives, are if not redeemed, at least reconciled The crazy sister who has spent a lot of the novel missing as she drives around America, is located and brought home, and though as she says her madness is not cured but temporarily at bay, it still feels like a happy ending.