Antitrust: Taking on Monopoly Power from the Gilded Age to the Digital Age 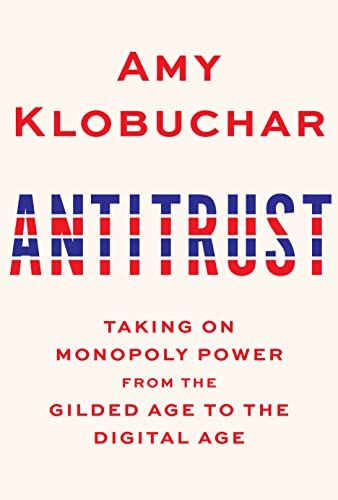 Bigger is not better, at least when it comes to corporate power and economic concentration. This is the thesis of Minnesota Senator Amy Klobuchar whose book on antitrust law is published in concert with US Senate efforts to update the current laws on this subject, of which she is the lead author.

Business concentration and anticompetitive behavior aimed at hurting consumers or squashing rivals became a major problem in the US in the late 19th and early 20th centuries. Here the rise of what were called trusts emerged, dominating markets ranging from steel, lumber railroads, sugar, gas and fuel, among others. These different economic sectors or markets came to be dominated by one or a handful of businesses, with the ability to set prices in a way to aggrandize their market position.

Classic books such as Ida Tarbell’s 1904 The History of Standard Oil Company or Upton Sinclair’s 1906 The Jungle were classic muckraker exposés chronicling the abuse of unregulated monopolies. Their books came out in the middle of the Progressive Era of American history where politicians ranging from Theodore Roosevelt to Woodrow Wilson called for the busting up of the trusts in the interests of preserving market capitalism, free enterprise, and mom and pop businesses.

Congress and the courts responded. In 1890 the Sherman Antitrust Act was adopted, subsequently followed by the 1914 Clayton Antitrust Act. These two Acts, along with a later 1936 Robinson-Patman Act and 1950 Celler-Kefauver Act were meant to define and prohibit anti-competitive economic activities including price discrimination, market concentration, anticompetitive mergers and acquisitions, and other behavior deemed to hurt consumers, rivals, and economic competition. Big was deemed bad when it came to economic concentration, and the framework of antitrust law was a powerful tool to thwart undesirable behavior. Major successes include the breaking up of big oil (Standard Oil), AT&T’s telephone monopoly, and American Tobacco.

But somewhere along the way antitrust law lost its way, and this is part of the subject of Klobuchar’s book. The senator tells a great story on the rise of trusts and the adoption of this legislation. She also recounts the history of congressional and judicial responses to monopolies. But her story is one that talks of the undermining of antitrust law.

It was Robert Bork’s 1978 The Antitrust Paradox that was responsible for a rethinking of the law. He argued that not all economic mergers and combinations were bad, not all price setting wrong; one had to judge antitrust law in terms of the economic efficiencies it produced and the benefits and conveniences it produced for consumers. Bork’s arguments, along with a Chicago School of Economics that mythologized free markets and a neo-liberal turn in economic policy and government policy under presidents Ronald Reagan and Bill Clinton, effectively killed off serious enforcement of antitrust law. The Supreme Court, under Justice Antonin Scalia and other conservatives, read competition out of antitrust law.

A second theme of Klobuchar’s book is telling the story of the consequences of such actions. We see media concentration in a few news and entertainment businesses. Facebook, Twitter, Amazon, and Walmart dominate their markets, crushing rivals and putting rivals out of business across the nation. Walmart and Amazon alone had even before the Covid-19 pandemic used their market muscle to destroy small businesses and shops across America. Google dominates the information market. Apple is a trillion-dollar business, and effectively we are again back to only a handful of businesses that dominate the telecommunications and energy markets. None of this good for the consumer, economic competition, or even American democracy.

The third theme of this book is the argument that it is time to reinvigorate antitrust law for the 21st century. Klobuchar first proposes we abandon the term “antitrust” as antiquated, instead preferring the phrase competitive law as used in Europe. Her book recommends 25 policy recommendations or steps that can be taken to reinvigorate competition law. The list includes hiring more staff to enforce current and new competition laws, make it more difficult to do anticompetitive mergers, shift burdens of proof to show anticompetitive behavior, change rules on price fixing and market tie-ins, and reverse many of the changes court opinions and federal regulatory agencies have imposed over 40 years that have weakened current laws. She also wants to take on tech companies.

There is a lot to like in this book. Klobuchar consulted with many experts in the research and drafting of the book. The history of antitrust or competition law is excellent, her telling the story of how the law was undone is also good, and her proposals reasonable. On the downside, the book at times reads like a politician’s political speech, where first person singular (“I did this and that or I introduced this bill”) takes away from the broader narrative and policy prescriptions.

One wonders though whether Klobuchar has gone far enough. In some sense her ideas are retro: take the law back to where it once was but update it . . . and go after Big Tech. We all want to protect the consumer and help small businesses, but a new wave of breakups and discouraging mergers might run the same fate as the first time these strategies were used, eventually resulting in their being undone by the realities of a new global capitalism able to work beyond nations state borders. The focus solely on the economic aspects of bigness is good, but unless one also tackles the political aspects and how it threatens democracy, the efforts to corral anticompetitive behavior may fail.