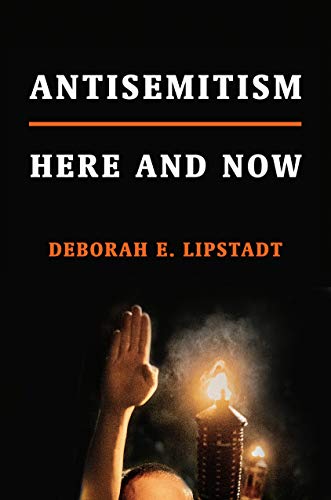 “Antisemitism Here and Now is for readers who are concerned by the dangerous rise in contemporary antisemitism but unsure how to understand and confront it.”

Historian Deborah E. Lipstadt’s Antisemitism Here and Now is a timely and necessary book as the decades’ long rise in antisemitism becomes increasingly random and violent.

Written as series of letters to two fictitious characters, one a student and the other a fellow academic, Antisemitism Here and Now doesn’t dig deep into the historical roots of this enduring hatred, which Lipstadt explains is “not the hatred of people who happen to be Jews. It is the hatred of them because they are Jews.”

Instead, Antisemitism Here and Now is a field guide for identifying, understanding, and challenging antisemitism’s contemporary forms. Drawing on the International Holocaust Remembrance Alliance, as well as fellow academics, Lipstadt defines antisemitism as a persistent, ubiquitous, and internally coherent system of ideas consistently focused on money, power, and conspiratorial control that are easily adaptable to new times and situations.

Jews can be (and still are) blamed by the right for being socialists and communists, as easily as they’re blamed by the left for being enmeshed in capitalism, just as racial, religious, and pseudoscientific rationales have blamed the Jews for everything from plagues to failed wars to any other of life’s small challenges or large disasters. As Lipstadt says, “Antisemitism is not simply the hatred of something ‘foreign,’ but the hatred of a perpetual evil in the world. Jews are not an enemy but the ultimate enemy.”

Lipstadt deftly navigates antisemitism flowing from the left and right, paying careful attention to how the internet and social media have given white supremacist groups, along with the alt-right, an organizing tool for not just spreading antisemitism and racism but inserting it into mainstream discourse thereby “normalizing open expressions of hatred,” especially when alt-right and white supremacist memes, cartoons, and other messages are retweeted and spread by a candidate for the presidency of the United States.

As befitting a historian, Lipstadt carefully documents the ways that Donald Trump and Jeremy Corbyn use antisemitism for personal or partisan ends, making irrelevant the question of whether either man is an antisemite. Trump may be more pragmatic, and Corbyn more ideological, but the damage each man does will remain long after either leaves the political stage.

Antisemitism is fundamentally a conspiracy theory, and Lipstadt gives thoughtful attention to how antisemitism is used to explain events, such as the 9/11 terrorism attack on the World Trade Center. Shortly after the attack, a government-controlled Syrian newspaper fabricated a story that “four thousand Jews were absent from their work on the day of the explosions,” and from this spread the baseless belief that Jews and Israelis were somehow warned in advance that the attacks would occur despite media coverage showing that Jews made up approximately 12% of the victims (as shown by obituary and memorial notices), which aligned with New York City’s Jewish population. Equally baseless was the French bestseller (translated into over two dozen languages) that claimed American Jewish neoconservatives planned the attacks to generate support for the invasions of Iraq and Afghanistan. These and similar falsehoods have become widely shared.

Lipstadt turns her considerable attention to difficult questions as whether antisemitism can be tolerated as free speech, the similarities and differences between antisemitism and racism, when criticisms of Israel mask antisemitism (and when it’s the kind of legitimate criticism that could be made of any government), and how anti-Zionism is in effect a form of antisemitism.

Noting that “Jews, together with other religious and ethnic minorities, have always thrived in societies where freedom of speech and religion have been highly valued,” Lipstadt devotes several chapters to American campus life and progressive political movements where fierce and often antisemitic challenges to freedom of speech, thought, and expression are occurring in the name of inclusion or justice.

Lipstadt’s expertise is in the Holocaust, so it’s not surprising that she tackles Holocaust denial with vigor. Denying or minimizing the Holocaust, whether from the left or the right, is yet another form of antisemitism, one that often involves “genocide inversion,” which redefines the victims of genocide into perpetrators, and typically equates Israel to the Nazis.

First used by the Soviet Union following the 1967 Six Day War, this equation rehashes age-old antisemitic tropes into modern forms. Lipstadt draws on the historical record to debunk claims of collaborations between the Zionists and the Nazis, as well as attempts by former Communist bloc nations to rewrite history when it comes to their active participation in the Holocaust. Her scholarship and courage are clear as she lists the heartbreaking torrent of murder, assaults, and abuse that is becoming daily life for what remains of Europe’s Jews.

While having written an engaging and enlightening book, Lipstadt’s use of letters is often stilted, and her fictional correspondents are (conveniently) a bit naïve. Knowledgeable readers may find Lipstadt’s analysis of antisemitism’s origins to be basic, but Antisemitism Here and Now is for readers who are concerned by the dangerous rise in contemporary antisemitism but unsure how to understand and confront it.

As Lipstadt rightly notes, facts and the historical records will not change the mind of anyone committed to antisemitic rationalizations. What’s possible and necessary, however, is to contain the spread of antisemitism by calling it what it is and confronting it directly. Among the many important strategies to take, Lipstadt argues, is for Jews to engage in the joys of Jewish life, and for all of us to pursue the values of our democratic society.

If you haven’t yet read Antisemitism Here and Now, please do, and give it to everyone you know.