Antigone Rising: The Subversive Power of the Ancient Myths 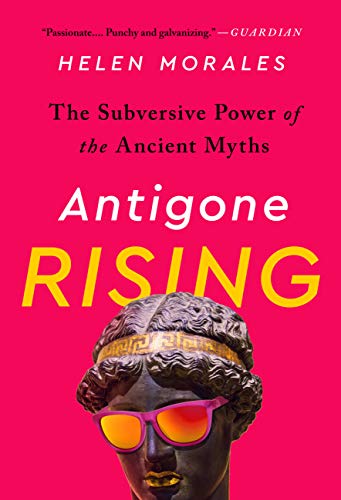 “tells a compelling story why the classics deserve a new look. They are narratives of empowered women, cultures that celebrate challenges to contemporary sex roles, and characters who are the models for many today who dare to be different.”

Knowledge of classical Greek and Roman literature, myths, and poetry once were the definition of a well-educated person. To have studied Latin and Greek was central to a liberal arts education, and any aspiring writer would allude to characters or plot lines of Sophocles, Euripides, Homer, and Aristophanes among others in their own stories, or literary analysis would seek allusions to them.

But alas, never more. Few schools offer Latin or Greek as either majors or subjects. The classics have been attacked as part of a Western canon that is written by old dead white men, misogynist, racist, or simply outdated. The push for more career-focused and employable schooling has relegated Catullus and his ilk to a forgotten history.

Enter Helen Morales. She is a professor of Hellenic Studies, exhorting a new generation to give a second look at the relevancy of the classics. Yet she offers not your grandfather’s interpretation of them. Instead, she aims to show how the classics offer a powerful subversive voice and perspective on contemporary society, worthy to be read and reconsidered by feminists, members of the LGBTQ community, and those wishing to challenge power and privilege. Antigone Rising inverts or as the subtitle suggests, subverts traditional understandings of the classics, and turns the stories into empowering tools that can highlight contemporary fiction and politics.

Ranging across eight chapters, Morales highlights female characters from the classics that can serve as role models for women today. There is of course Antigone who defies the King Creon in burying her brothers contrary to the latter’s edicts. Antigone is the universal subversive, taking on power and challenging authority. She is Greta Thunberg today, or as depicted in the contemporary Antigone in Ferguson, Michael Brown. Perhaps if written today, it would be George Floyd.

Lysistrata is the inspiration for a sex strike called in 2019 by actress Alyssa Milano to protest anti-abortion laws, or Spike Lee’s lead character in the 2015 film Chi-Raq. Hippocrates recommendations on body shape and diet are the inspiration for those who argue current pop culture fat-shaming holds out an unrealistic standard for the female form. Plutarch’s Life of Solon tells the tale of women punished when they dress in ways to challenge gender norms, and Aphrodite and Helen of Troy are both the inspiration for Hollywood beauty and the story of empowering women. BΕΥΘΝCΣ is a goddess, transgender politics is found in Ovid’s Metamorphoses. The list goes one.

What Morales does well is write–but she also tells a compelling story why the classics deserve a new look. They are narratives of empowered women, cultures that celebrate challenges to contemporary sex roles, and characters who are the models for many today who dare to be different. The chapters specifically on Antigone, Lysistrata, and transmythology are particularly insightful, but anyone who wants a new gloss on the old plays will find that despite them being written by among the oldest and deadest of the white males, they still offer insights.