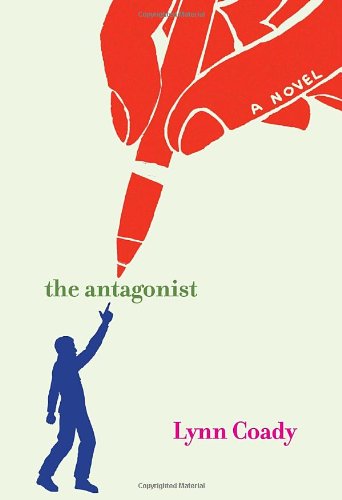 It is a beautifully constructed, precisely written, and engaging piece situated in the space where the two circles in the Venn diagram of narrative and truth intersect—and occasionally blur. And though truth and narrative do blur, one can see why Lynn Coady’s book was a finalist for the 2011 Scotiabank Giller Prize in Canada.

Ms. Coady, the author of Strange Heaven. Play the Monster Blind, Saints of Big Harbour, and Mean Boy, is a plainly a master at work. The control of the narrative and the characters she displays here is nearly godike in its precision—fitting, considering that one of her major themes is the authorial god complex.

Ms. Coady plays with the idea of the “I, the all-powerful author,” the “omnipotent narrator” with the power to shape and transform events with one flick of her authorial wrist.

The Antagonist is that most modern of epistolary novels, the email novel. The central premise: a man, Gordon Rankin, Jr., aka "Rank, has discovered his own life, warts and all, depicted in a novel penned by an old college friend. The narrative plots Rank’s response to this attack, an act of narrative terrorism “vampiring the good and the real out of people’s lives” from his initial rage:

“The fact that the cliché of me was all you really took. You boiled a whole life, an entire human being, Adam, down into his most basic, boneheaded elements.”

Through spooked: “Maybe now you’re getting an idea how it feels to read something about yourself that you’ve had no hand in or any control over. Like those cola commercials where they use footage of dead celebrities, do you remember that? Fred Astaire, smiling his slow, smirky smile at a refreshing can of cola in lieu of Ginger. And some people said it was ghoulish, grave-robbing just to sell pop. So how does it feel to have your grave robbed?”

He imagines his old college friend: “sitting around rubbing your hands together and cackling to yourself as you plotted out your miserable theft, not just typing away and suddenly looking down and going, Oh, check that out. I just completely screwed over a guy I used to be buddies with.”

Indeed, Rank’s email responses cycle through the famous seven stages of grief as he struggles to come to terms with the liberties he feels have been taken with his story/his history. And his response is to attempt to write his own life as an act of reclamation:

“And yes, what the hell! I am going all the way back and starting from day one, with my birth. I can do whatever I want because it’s my life and it’s my story and it exists and has existed on its own very specific terms. . . .”

But soon, as Rank discovers, the application of pen to paper—or fingertip to keyboard—is by its very nature a transformative act, all wrapped up in selective memory, in the things we don’t want to say—or admit—about ourselves or those close to us.

“I’ve been reading over what I sent you so far trying to figure out why in God’s name I can’t just settle into a nice, neat, chronological version of the story of my life. I keep going off on these pointless tangents. It seemed like such a simple idea at first. All I had to do was sit and write it out. But it’s actually harder than you would think.”

Soon, Rank’s own version of himself becomes as fictional as his college friend’s:

“Do I feel real to you? Do you feel that I actually exist, pounding keys two-fingered here at my kitchen table, or is it more like receiving an email from a figment of your imagination? Is it like I’m a ghost coming back to haunt you?”

The art of storytelling always gets in the way: “Maybe you started off writing your book with the noblest of intentions, wanting to get across something real and significant. Maybe you were holding something in your mind—some sacred value or belief—and thinking: This, this is what I want most to articulate. . . . And all of a sudden you get sidelined. . . . You let it distract you from your noble purpose. Suddenly people in the story are doing and saying things you never meant for them to do or say—and you’re letting it happen because it’s fun.”

While the titular antagonist could be any or all of the major characters in the novel, it soon becomes clear that the author figure him/herself is the real mover and shaker.

It is fiction, narrative, which has transformed the paper version of Rank into “King Midas in reverse, our hero: fingertips radiating plague.”

For stories, by necessity, oversimplify life, or make it clichéd. Life, after all, is not a roadmap. Nor is it reminiscent of “God’s pinball” machine. Choices in life do not work as they do in fiction: “As if some kind of celestial fast-food overseer descended from the heavens with an ID cone in one hand and a crumpled JJ’s cup in the other . . . displayed them both . . . and thundered: Pick!”

Neatly channeling Paradise Lost, Facebook, T. S. Eliot, and religion, Ms. Coady shows: “You can get addicted to stories the way you can to booze or drugs. . . . It all serves the same purpose . . . It gives you some kind of comfort.” And: “We want to hear the voices—the ones that tell us what to do and how we’re loved. We want to be as little children and believe.”

I believe in The Antagonist because what Lynn Coady shows is a different kind of truth, an artistic truth, and it is this that Rank struggles to come to terms with. Or does he?

“Incidentally, did you think you were getting the whole story all this time, Adam? A complete picture? Were you even arrogant enough to suppose you could detect psychological subcurrents and underlying motivations that perhaps I’m not even aware of myself? Has it occurred to you that I could be making this entire thing up for reasons of my own—maybe just to fuck with you?”