The Answer to Bad Religion Is Not No Religion: A Guide to Good Religion for Seekers, Skeptics, and Believers 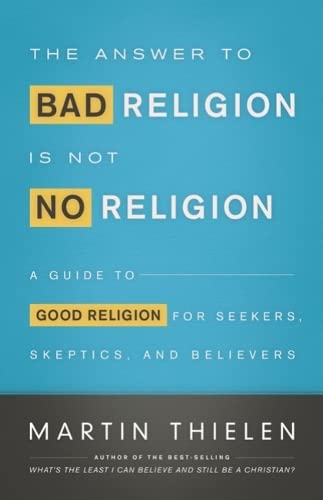 “Did Thielen convince me that one sect of Christianity is better than another? The simple answer is no. He does make a number of good points that the liberal community would agree, but there is not a new and convincing argument made here.”

There is a premise that begins this tale of good versus bad religion: The reader must be a believer.

The title of Rev. Martin Thielen’s first book provides an idea of where his second is going: What is the least I can believe and still be a Christian? Thielen spends his time telling stories and anecdotes from his own experience, replete with biblical quotes, to answer the questions as to what is bad versus good religion. Throughout the book, the reader will follow the lines of a liberal teaching Christian faith as Thielen takes his time to outline his premise.

Though the book is a fine example of today’s liberal Christian apologetic writers, one must wonder if Thielen’s premise hold true with the title of the first chapter, “Bad religion engages in the self-righteous judgment of others.” In fact, what may be a “bad religion” to one would be perfectly fine to another and one could find examples of the five components of “bad religion” in all Christian, Jewish, and Islamic sects.

Yet his push toward a more open-minded and liberal religion is evident in this same chapter. He finds that the “hateful condemnation” of homosexuality, for example, “is deeply troubling. It is also a prime example of bad (and judgmental) religion.” He continues with the citing of the story of Pharisee (Luke 18: 9-14) as his justification for this position. He continues his justification against hateful beliefs quote from John 8:7-, “Let any one of you without sin be the first to throw a stone at her.”

Often he will start his discussion with “I once heard a story . . .” leading to his own parables of good and bad religion. From a story of a small boy whose turtle had died to stories of other ministers who had met resistance while attempting to practice “good religion.”

One of his final stories concerns a church that would not accept newcomers to its congregation unless they were property owners. The attempt, in this case, was only to evangelize to a specific economic class and not those who lived in a trailer park next door to the church. 20-years later the church had been converted to a restaurant. The moral of the story was that the patrons were not chosen by their status.

There are a number of issues involved here. Many members of the more “mainline” and conservative Christian communities will have a problem with Thielen’s depiction of their movements as “bad.” Those who ate true skeptics, agonistics and atheists will find some of his premises hard to comprehend. This included the notion that nature causes suffering. Thielen steps outside of his own religious position to help justify the existence of one sect as better then another. In other words, he violates his very first premise of a bad religion.

For the believer who left her mainline church because she no long believes in the church’s political agenda, Thielen is a good read. He presents a cohesive argument as to why the liberal church is a better choice for those who are still seeking a religious experience. For those who are of the more liberal Christian communities or who are atheists, this is a good example of apologetic evangelicalism.

The question is, Did Thielen convince me that one sect of Christianity is better than another? The simple answer is no. He does make a number of good points that the liberal community would agree, but there is not a new and convincing argument made here.