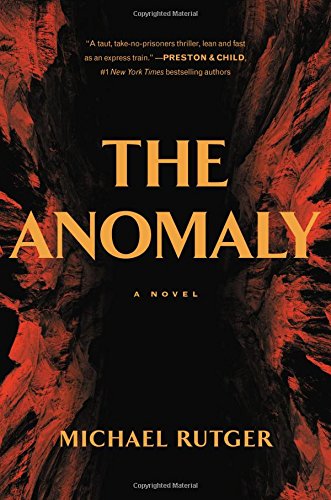 “For fans of the Indiana Jones movies and television series such as Fringe, The Anomaly is great escapist entertainment for the summer cottage or those long vacation drives across the country.”

Nolan Moore is a celebrity archaeologist specializing in unsolved mysteries. His slogan is, “It matters not whether we find; it only matters that we continue to seek.” His video program, The Anomaly Files, is relegated to a small YouTube audience, but when he and his team receive a grant from the mysterious Palinhem Foundation to pursue their latest project, visions of a network television slot dance in their heads.

Following up on the work of the 19th century geologist and explorer John Wesley Powell and Smithsonian scout G. E. Kincaid, whose adventures made the newspapers in 1909, Nolan and his crew enter the Grand Canyon in search of a cavern somewhere in the rock face that is said to lead to a strange network of tunnels and an incredible secret.

Astonished that for once his research has produced an actual discovery, Nolan leads his team forward, camera rolling, only to have their adventure crash to a sudden halt in a nasty turn that puts all their lives at risk. What is the secret of the cavern and its passages? Will Nolan and his crew survive to tell the world about their discovery, or is this something too horrible to let loose on the world?

The Anomaly is an adventure-thriller by Michael Rutger, a.k.a. Michael Marshall Smith, that aspires to a place on the bookshelf next to Michael Crichton and Preston and Child. A screenwriter, Rutger uses obvious references to Raiders of The Lost Ark and Alien, among other films, to appeal to fans of the weird and creepy.

The novel is divided into thirds. Part One introduces us to Nolan and his production crew, gets them into the Grand Canyon, and delivers them to the doorstep of their discovery. As an opening 100 pages, it's really quite good. Rutger uses humor effectively to develop his characters, and his narrative at this point is clean and uncluttered,  moving the reader steadily forward.

Part Two, in which their experience takes a sudden turn for the worse, unfortunately fails to maintain the same high standard of storytelling. The action slows to a crawl as the characters bumble around in claustrophobic darkness reacting to the weird things that start to happen. The mystery looms, unexplained. The plot struggles, its pulse thready.

When Part Three finally arrives, for those who are still tuned in, the answers to all our questions are revealed, and they turn out to be rather implausible but definitely strange and fantastic, in the old pulp magazine sense of the words.

Rutger writes well when he wants to, occasionally showing a deft touch with his characters. Early on, when Nolan experiences a dark night of the soul, he reflects that “losing your mother is the burning down of your own personal Library of Alexandria.”

On the other hand, producer Ken's potty mouth is not to be tolerated, character trait or not, and the chapter that plops Mollie's backstory into an already viscous Part Two is a mistake that should have been edited out.

Also on the subject of editing, the photographs peppered throughout the book, ostensibly “From the Files of Nolan Moore,” while intended to enhance verisimilitude, reproduce mostly as black-and-grey blotches and likewise should have been dropped.

For fans of the Indiana Jones movies and television series such as Fringe, The Anomaly is great escapist entertainment for the summer cottage or those long vacation drives across the country. If you're heading for the Grand Canyon, it might be just the thing.