Anointed with Oil: How Christianity and Crude Made Modern America 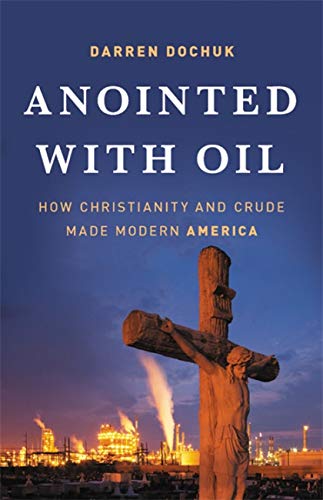 "Anointed in Oil uniquely documents . . . the history of petroleum and how through ideals, politics, and religion the oilers 'have shaped modern America.'"

American oil strong connections with religion and America's alleged ideals. Darren Dochuk begins Anointed with Oil with how Baptist Sunday school teacher Bud Higgins wanted to use the profits from his pioneer oil well at Spindletop to "construct a utopian town" that served oil and "to channel it toward realization of human perfection around heavenly splendor."

Anointed in Oil uniquely documents in chronological order the history of petroleum and how through ideals, politics, and religion the oilers "have shaped modern America and its ascendant moment." It must, from necessity, include "the nitty gritty of oil economics and politics" as when Dochuk discusses at length the boom at Spindletop.

Texas "petroleum bankrolled colossal cathedrals, schools, missionary organizations, and foundations . . . to fashion the United States into a resplendent Christian commonwealth." Anointed with Oil "is the story of the dynamic reciprocity that Christianity and crude shared in the making of modern America" and the "American Century."

Yet no satisfactory answer really exists as to why. Churches held particularly valuable real estate in the early oil days of Pennsylvania. Rockefeller founded famous international philanthropies, according to reformer Ida Tarbell, the daughter of a failed oiler, "to pay for his sins." After the fall of Rockefeller's Standard Oil, however, the big and the little in oil "began to compete in the realm of charity."

A crusade existed among the oil companies existed before Spindletop "which blended religious, economic, and political concerns into one combustive fuel for America's global march." "America's guardianship of crude meant it was responsible for elevating humanity" and "to transform the world into something godlier and better."

Even Edwin Drake, who started the oil industry in 1859, hoped that his profits would "allow him to further Christ's Kingdom." The "inaugural boom-bust phase" began during the Civil War. These idealist pioneer oilers even included John Wilkes Booth.

"The inescapable violence," "geological mysteries, and crude materialism" coexisted with "men and women of reformist sensibilities" like Rockefeller who "attempted to clean up the mess." "Between 1857 and 1859," America "began to experience an unusually intense outpouring of religiosity," "the so-called Businessmen's Revival."

Big oil also began in parts of Pennsylvania with a rich history of rebellion and "religious enthusiasm." Extreme idealism in the DNA of oil does not, however, fully explain why the oilers so determined to change the world, and so often with negative consequences. Zion Oil, for example, "continues to pursue Israel's oil and the end times today."

Baptist oil giant monopolist John D. Rockefeller "assumed godly capitalists would honor the principles of efficiency and control." He "was also a towering reformer who propagated a social gospel."

The "oilers," however, "only rarely spoke with one voice." "Most often, they engaged in unabated cutthroat competition" and they even "waged war for the right to define the core beliefs and moral composition of America at home and abroad."

Anointed in Oil brings in Ida Tarbell, Dr. E. D. Cope of dinosaur fame, the Nobel brothers, the Rothschilds, and a galaxy of oil giants unknown to the public. With each, Dochuk writes, even of the 21st century, the oilers creed to "place your faith in a higher being and honor his rules for holy living, the logic read, and ride the capricious offerings of earth and the markets to heavenly fulfillment---no matter the heavy (and ecological) costs."

Epic does not begin to describe the narrative. This book has few illustrations but extensive documentation and a select bibliography.