Anne and Her Tower of Giraffes: The Adventurous Life of the First Giraffologist 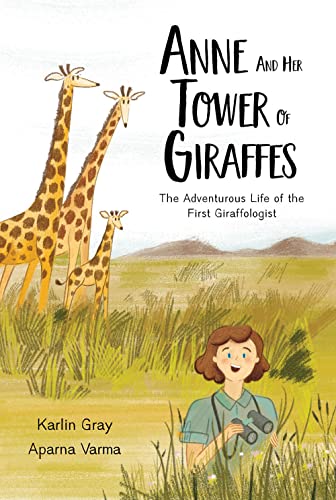 “Anne Innis Dagg is a worthy subject for a picture book and this story may inspire readers to look for more information about her.”

Dr. Anne Innis Dagg certainly deserves to be better known. Fortunately there is a movie about her, which conveniently serves as the ending for this picture book biography. Karlin Gray, the author, captures Anne’s passionate interest in giraffes, starting as a young girl:

“Anne drew picture after picture of her giraffe. She wanted to know EVERYTHING about it.

What do giraffes eat?

Do they make noises?

Why are their necks so long?”

Unfortunately the writing can be awkward at times, as when Anne returns to the zoo to visit giraffes in person: “Bright blues peered into big browns.” Meaning that Anne’s bright blue eyes looked into the giraffe’s big brown ones. This clumsy sentence is repeated later in the book, to equally poor effect.

Further weakening the story, the time frame isn’t made until nearly halfway through the book. Readers need context that isn’t provided quickly enough.

“A woman traveling across the world on her own? A woman studying animals in the wild? Unheard of!”

In fact, this wasn’t something happening in the 1900s or the 1920s or even the 1940s, but as late as the 1950s. Aparna Varma’s illustrations could place the young Anne in almost any time from the 1910s on, so there are no clear visual hints. Once Anne gets to Africa to study her beloved giraffes, the art joyously expands to fit the bigger skies in that continent.

The text, however, remains constrained. Anne’s troubles facing the sexism in academia is reduced to “universities just laughed at her. And that laughter stung.” Was there really laughter or simply dismissal, a refusal to take her studies seriously?

Anne’s determination still comes through, though the ending feels slapped on, not the kind of satisfying resolution hoped for in picture books. Instead Anne’s story is made into a movie. “Now even more people could learn about giraffes. And that made Anne laugh with joy.” The End.

Anne’s mission was presented from the beginning as being about her own curiosity, her insatiable need to know more, which are the beginnings of any true scientist. The author could have followed the development of that curiosity into some kind of satisfaction in the discoveries Anne ultimately makes. Instead, the question of science is discarded in favor of a red-carpet scene, an image that oddly clashes with the vistas in Africa that preceded it. It’s an ending that’s not really an ending at all.

At least the book’s backmatter provides an interview with Dr. Anne Innis Dagg, which provides a much better ending than that of the story that introduces it.

Having an interesting subject is the first essential ingredient in picture book biographies. The next ingredient is a narrative arc, and the final element is a good ending. This book scores in one of these three categories: Anne Innis Dagg is a worthy subject for a picture book and this story may inspire readers to look for more information about her.