Animals Up Close: Animals as You've Never Seen Them Before 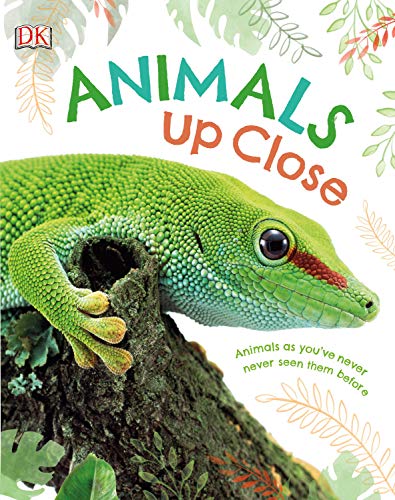 “Animals Up Close is a visually attractive picture book filled with stunning closeup photographs of a wide range of animals. It’s packed with information on each species but fails to deliver a coherent biological overview. Children who enjoy regurgitating facts will love this book, but it’s not for those who learn best via a narrative format.”

Animals Up Close: Animals as You’ve Never Seen Them Before includes 16 land animals, 12 sea creatures, and nine animals that fly. Some, like the tortoise, chipmunk and dragonfly will be familiar to most readers, but many others are decidedly unfamiliar, such as the postman caterpillar, brittle star, and sea cucumber.

There’s a good variety of subjects, including all the vertebrate groups (mammals, birds, reptiles, amphibians, and fish) as well as arthropods (insects, scorpion, crayfish, and crabs) molluscs (octopus, sea slug, clam) and echinoderms (brittle star and sea cucumber). Each subject is given a double page spread with a closeup photograph of the animal placed in a simplified environment that’s a mix of photography and artwork.

The photographs usually show the entire animal, but in some cases only the head is seen. Particularly in the case of unfamiliar animals, this less than ideal cropping could be remedied by the inclusion of smaller views of the whole animal. That’s the treatment given to the horseshoe bat, where a closeup shot of the animal’s bizarre face is accompanied by long shots of flying bats in the background. One might wish to see a similar presentation for the gecko, salamander, caiman, mudskipper, and four birds in which only the head is shown.

Of the 37 subjects described, only 11 are given their correct common species name. These include the tiger salamander, puss moth caterpillar, and fire-tufted barbet. Thirteen are identified by the group to which they belong, an acceptable choice for a young audience. It would be preferable, however, if it was made clear that tree frogs, sea horses, and sea slugs are a large and varied group of which the one illustrated is but one example.

We’re told that the “Disguised Gecko” is actually the Madagascar day gecko. Why not give us its correct name instead of inventing one? Many other animals are given descriptive handles without telling us that the labels are adjectives and not their real names. There’s no such animal as a whiskery weasel, tough tortoise, strange seahorse, floating caiman, intelligent octopus, or fiery flamingo. And why call the perfectly well-named pygmy marmoset a mini marmoset? All of this leads to unnecessary confusion for anyone trying to look up information on the species.

The text follows an unfortunate contemporary trend in children’s science books of providing short snappy information packets of random assorted facts. The topics chosen seem arbitrary. There’s no overview, no way of organizing the plethora of information into a coherent whole. When this approach is taken, it’s no wonder many children find science daunting and scientific information difficult to retain.

Modern biology is built on Darwin’s theory of evolution, which provides a framework for ordering the vast assemblage of living organisms according to their relationships. A book such as this one could provide an illustration of a simplified evolutionary tree showing where the various animals belong on it.

The book’s glossary attempts to clarify unfamiliar terms but instead gives more indigestible and arbitrary information. There are definitions for all the vertebrate groups except birds. We’re told that fish “usually” live in water; amphibians “usually” spend the first part of their lives in water; reptiles are “usually” covered in scales; mammals “usually” have warm blood, fur, and feed their young with milk. We’re also told they all have a backbone, but we’re not told which of the other animals we’ve encountered lack a backbone.

Presented with books such as this one, it’s no wonder that children often mistake an accumulation of facts for knowledge. It’s unfortunate that the editors of this otherwise appealing book did not think to include a page or two on animal adaptation or other general topics that would help the reader to grasp underlying principles that are the beginning of a true understanding of the subject.

In summary, Animals Up Close is a visually attractive picture book filled with stunning closeup photographs of a wide range of animals. It’s packed with information on each species but fails to deliver a coherent biological overview. Children who enjoy regurgitating facts will love this book, but it’s not for those who learn best via a narrative format.