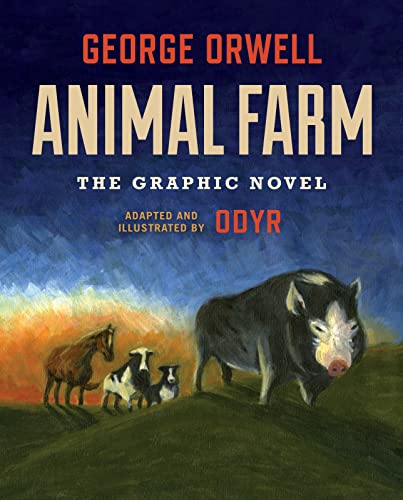 So begins Animal Farm, the 1945 classic masterpiece by George Orwell, a visionary of such insight that his books, Animal Farm included, are as timely today as the day they were first published.

The text hews closely to the original, but acquires highlights and double meanings not originally made explicit, now clear by virtue of the breaking down of prose to accommodate the illustrations, so that the effect is similar to the effect of line breaks in poetry: a meaning within the line, a new additional meaning made by the place where the line was broken by the artist, in this case, ODYR, whose rich  brushstrokes do much to enhance the experience of Orwell’s brand of satire.

Not that Orwell isn’t still the star of Animal Farm, the lines in his original book so prescient, so detailed and incisive in its insight of how fascism and dictatorships could be born of human flaws built into certain dynamics, that you can look back and see how well it describes events in Cuba that had not happened when the book was written, and how it describes, just as well, events happening now in places like North Korea, Russia, Turkey, and to quite a minor extent, here in the United States, where tensions between haves and have-nots, between the ruling class (politics, celebrity, economics) and the common citizen, continue to devolve into a messaging battle controlled by “pigs” intent on using their (or benefitting from a leader’s) crude cult of personality, using it as a weapon to avoid losing their positions of power.

But though, in the end, it’s almost impossible to say it better than Orwell did, in simple language, that everyone young or old, learned or not, could understand and feel in their hearts, could see if they had eyes to see, and recognize when faced with the pigs of a democracy at risk, ODYR does do a great job of salvaging the essence, the satirical venom, of each scene, and using it to brightly highlight the crucial points of Animal Farm:

This last pronouncement is repeated by sheep, of course. Then on a barn the maxim: “All animals are equal, but some animals are more equal than others.”

“After that nothing seemed strange.”