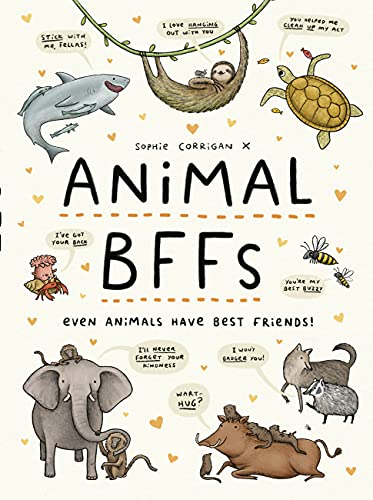 “Animal BFFs is a treasure trove of information about animal pairings that a reader can enjoy in one sitting. A whole science curriculum could be developed around this book . . .”

Sophie Corrigan’s Animal BFFs is a delight from beginning to end. It’s colorful with cuddly and not-so-cuddly animals created digitally in pastels and outlined in black. Get ready to learn about unlikely animal pairs from all over the world.

How do caimans get their tear ducts cleaned? Butterflies drink their tears.

How do crocodiles clean their teeth? Plovers fly into their mouths and eat the stuff trapped between their choppers.

Why do frogs and tarantulas lay their eggs in the same burrow? So that the frog can eat the ants that feed on tarantula eggs. Tarantula could eat the frog but chooses not to, to save her babies from ants.

There are all kinds of amazing animal pairings like these. The ostrich and the zebra, squirrels and song birds, egrets and water buffalo (the book says buffaloes), burrowing owls and rattlesnakes, hermit crabs and sea snails, etc.

Each pair gets four pages of information. Plus, there is comedy. The first double-page spread suggests the relationship through speech bubbles. Then turn the page and you’ll see that it isn’t exactly what you thought.

Each section of the book gets two pages of introduction: Animal BFFs, Friends from Afar, and Animal Enemies.

The book has 36 pairs of animals that help each other directly (mutualism), help each other indirectly (commensalism), or one animal helps another and gets nothing in return (parasitism). These are some 64-dollar words for young children ages seven to nine. But the budding biologist or the elementary science teacher will appreciate the terms.

Sophie Corrigan lives in the UK. Her web page says that she watches a lot of nature programs.

One would’ve like to have seen a tiny speech bubble somewhere telling the reader where to find the pairs of animals by continent, but maybe Corrigan felt she had enough going on already, with the animals making jokes on the first double-page spreads, and then the animals/author speaking the truth on the second double-page spreads.

The end papers are green in the front of the book and orange at the end of the book. There’s an extra double-page spread of paired animals right before the two-page glossary.

This hardcover will need to be fortified by librarians so that it can survive its many checkouts. Animal BFFs is a treasure trove of information about animal pairings that a reader can enjoy in one sitting. A whole science curriculum could be developed around this book, or just a few fun lessons.