Angst: Origins of Anxiety and Depression 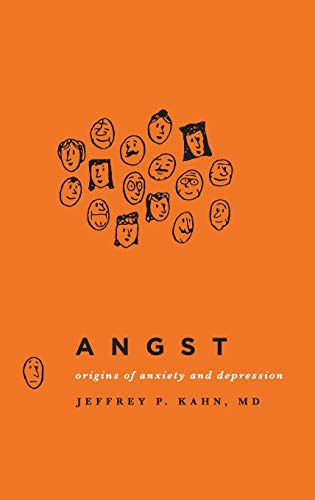 Angst is variously defined as a feeling of anxiety, apprehension, depression, dread, or insecurity. It is very much a modern malady affecting at least 20% of the population.

In this book, Dr. Jeffrey Kahn, a practicing psychiatrist for 30 years, provides a unique insight into the causes of modern day angst. The five major anxiety and depressive disorders responsible for angst—panic anxiety, social anxiety, obsessive-compulsive disorder, atypical depression, and melancholic depression—have roots in social adaptations necessary for people in ancient societies to survive. These syndromes represent the vast number of disorders seen in Dr. Kahn’s practice. Schizophrenia and its relationship to consciousness is also addressed. Angst, according to Dr. Kahn, is due to a conflict between the actions of modern independent rational man and ancient social instincts.

Dr. Kahn is careful to point out that although the book contains general information about mental health and medical diagnosis, treatment, and prognosis for the layperson as well as for clinical professionals, it is not intended as a manual for mental health care.

Dr. Kahn uses a variety of methods in the book to develop reader interest, including a wealth of illustrations, clinical studies, and cartoons. He presents many hypothetical case studies related to each syndrome portraying people in many cultures both ancient and present. Two different outcomes are often shown, with or without therapy.

Dr. Kahn goes to some length in describing current controversies regarding categorizing syndromes. Although this discussion would seem to be of less interest to the layperson, his purpose became clear later in the book when he discusses the current trend for simpler and broader diagnoses.

The neurotransmitter serotonin has a beneficial role in moderating social behavior for all five biological syndromes. Drugs used to treat these syndromes act by increasing serotonin in the brain. After presenting his theory in Chapter 1, Dr. Kahn divides the book into Part I, describing syndromes as they appear in individuals, and in Part II, as they appear in large groups of people.

As Dr. Kahn points out, the notion of psychological evolution began with Darwin, further elaborated by Freud and Jung. Due to the complex nature of emotional conditions there has been little progress in identifying specific genes to account for angst. Angst, as described by these pioneers, is a result of conflict between our inherited social instincts and the modern environment.

Panic anxiety is characterized by sudden fear that so grips a person s/he wants to flee to a safer place. In primeval human society it served as a mechanism to warn people not to wander too far from the tribe.

People exhibiting social anxiety maintain a low profile in order to avoid embarrassing themselves. This syndrome may have its basis in primitive society, when people of lower social ranking were submissive in order to reduce hostile competition within the tribe.

Obsessive-compulsive disorder (OCD) could have its origin in ancient society as traits to maintain cleanliness, to build things, to save supplies for future needs, and to reduce the risk of disruptive behavior.

Atypical depression is an excessive sensitivity to rejection. It has its basis in ancient society to help people sense and follow cultural norms and to try to avoid confrontation and hostility within the tribe. Dr. Kahn points out that in today’s more extensive society it is more difficult to sense everyone’s concerns.

Melancholic depression may have been a biological method of removing nonessential members from ancient tribes. In modern times, this syndrome at its most severe can be a death wish, as patients feel they are a burden and have a feeling of hopelessness.

Dr. Kahn described the development of consciousness and reason and how it evolved from social instinct. Schizophrenia is a type of psychosis that occurs when the social instinct of a person is dominant over conscious reality. Drugs to treat this condition block dopamine.

In Part II, Dr. Kahn addresses the increase in angst due to the rise of reason in modern civilization. In large groups of people, who are termed herds by Dr. Kahn, social instincts appear as personality traits. Herd behavior requires social instincts for everyone to get along. When herds evolve, everyone contributes specialized skills. Various factors determine the roles people assume, but personality is an important factor.

Dr. Kahn shows that five major personality factors match up very well with major social instincts and diagnoses. He discusses studies showing that the interaction of social instincts may explain the complexity of personality disorders. Evolution may have developed consciousness to increase our ability to sense the emotions and behaviors of others, given the importance of social interaction. Those with greater intelligence are more aware of instinctual angst and through reasoning are better able to control it.

Dr. Kahn brings up the notion of counter-instinctive behavior that is opposite to one’s inclinations. As people are compelled to overcome their symptoms, they are driven to make larger societal contributions. Evolution may have selected for counter-instinctive behavior since it can enhance creativity and productivity. Alcohol increases serotonin and calms instinctual angst.

Dr. Kahn points out the role of religion in providing moral and legal codes and for the management of anxiety and depression. The conscious moral codes of religion derive from our emotional social instincts. He shows the relationship of religious practices with the six social instincts. Each social-instinct/syndrome/personality factor plays a role in coronary artery disease.

In the final chapter, Free to Choose: How to Balance Your Reason and Instinct, Dr. Kahn discusses applications to his theory on angst. He emphasizes that there needs to be a balance between biologically evolved social instincts that promote harmony within a group and conscious reasoning necessary to express individuality and accomplishment.

Physicians proposing psychiatric treatment or medication for angst need to be aware of the tension between reason and social instinct. Dr. Kahn discusses ethical considerations for treatment decisions as well as for treatment approaches. Intriguingly, Dr. Kahn speculates on the direction future social evolution may take. For example, lower genetic serotonin levels among some Asian cultures may be more beneficial for people to adapt to those cultures.

In Summing Up, Dr. Kahn considers Angst an overview and describes various approaches in the direction of future research to help support his theory of the evolutionary basis of social-instinct functions. For reference sources, Dr. Kahn provides an Appendix of Diagnostic Criteria, Notes, and a Bibliography.