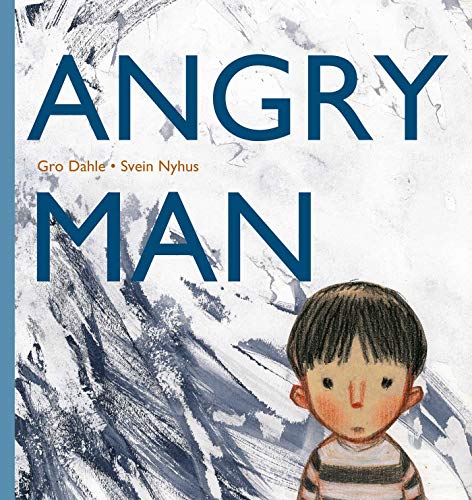 “Who is this picture book for? Any child would find it a horror story about a destructive father and a mother who can't keep herself or her son safe. A child in an abusive relationship won't find comfort in these pages since there's no real resolution.”

Angryman paints a disturbing picture of violent mental illness, a father whose moods shift with a dangerous edge. Dahle, a Norwegian poet whose text is translated here by Tara Chace, describes the nervous tension of waiting for Dad's anger: “Something's creeping out from the corners. Something's waiting the wall. Shadows in the wallpaper: A cupboard that's open just a crack. Vases getting ready to fall. 'Shh, close the doors carefully. Shh, walk quietly across the floor: Clear the glasses from the table.”

When Daddy transforms into Angryman, the fear is sharp and intense: “The hallway is on fire. Angryman is burning in the hallway. Mama is flickering in the flames. Mama becomes so small. . . . Boj hears Mama weeping in the fire. Boj hears Mama yelling into the wind . . . Everything is flickering and breaking.” The accompanying art, by Svein Nyhus, shows an enormous monster of a father holding the mother trapped in one giant hand while the boy, Boj, cowers in his bedroom.

The next page is perhaps the most disturbing in the book as the boy seems to run away in his head, dissociating from the violence on the other side of his door. This is a family in crisis. A father who beats his wife and traumatizes his young son, crying after his anger leaves him so that his wife and son can comfort him.

While Mama tries to keep Boj safe in his room and acts as a wall between him and Angryman, her meek catering to her husband's moods isn't reassuring but enabling. She doesn't leave her husband because “who else would deal with the computer? And who else would fix the car or screw in the lightbulbs?”

Although Mama insists Angryman is a secret and Boj mustn't tell anyone, Boj writes a letter to the king asking for help, wondering if it's his fault that Daddy hits. In response, the king comes to take Daddy away to his palace where “Daddy will get to fix himself” and Boj can come visit him. The final page shows a happy, smiling Daddy, catching Boj in his once-threatening arms as Mama watches.

Somehow, though, this isn't a reassuring story but a deeply disturbing one. Who is this picture book for? Any child would find it a horror story about a destructive father and a mother who can't keep herself or her son safe. A child in an abusive relationship won't find comfort in these pages since there's no real resolution. The ending is too quick and pat after so many pages of tension and fear.

And Boj doesn't find any inner strength in himself. He doesn't realize that nothing is his fault, it's his Daddy's. And Mama's for allowing the abuse to continue. Instead, he accepts Daddy as he is. Perhaps nice to do as an adult but dangerous as a child when the abuser still has power over you. There is no “aha!” moment that it's not Boj who's wrong here, it's all the adults.

The king's palace must be a metaphor for either a mental institution or prison, a place where Boj can safely visit Daddy. This book belongs in the waiting room of such an institution, but not in the bedroom of any child. Any library that shelves it should add a warning that the pages may be troubling for a picture book age child and should be read only after a parent has vetted the contents.