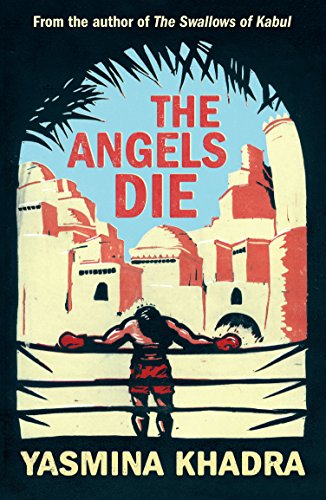 At first glance, The Angels Die is a straightforward story about a young man afflicted by crippling poverty who finds meaning in his wretched life through boxing. At one level, the novel is certainly about Torambo’s journey—both physical and metaphorical—from the poorest slums of an unnamed village to the North African championship in Algeria. But more interesting are the inner layers of the story itself when peeled like an onion to reveal the ugly yet truthful messages of racism and income inequality.

As a child, young Torambo flees with his family when his mountainside village in colonial-period Algeria is swept away in a flood. He finds refuge in a place called Graba, which can only be described as “an open-air asylum . . . [where] a tidal wave had swept across the hinterland and tons of human flotsam and jetsam had somehow been tossed here.”

Torambo finds Graba so full of abject poverty and human misery that he dreams for an escape. He meets a variety of characters, from gypsies to Arabs, widows to hardened men, and of course the innocent children stuck in the trenches. Seen through the eyes of the child Torambo, these secondary characters paint a picture that is as horrific as it is fascinating.

Finally, the family is able to move to the city of Oran, and there is a tiny streak of hope for climbing up the economic ladder to better prospects for them all. Oran is “a breathless adventure, a crossroads where every era comes together, each in its own finery.” For many it is a rich offering, but for Torambo there are barriers he cannot cross. He has nothing at a time when race and culture is everything.

An Arab in Algeria is looked down upon in the worst possible way, considered less than an animal, not allowed in European spaces like restaurants or boxing rings. He grows up with an innate sense of injured pride and low self-esteem, unsaid but witnessed by those around him. The only expression of his fury and confusion is through his fists; and a chance fistfight with a rich customer at the garage where he works leads him down a fortunate path: boxing.

Fans of sports fiction and nonfiction will be aware of the power of sports to change the lives of those living in poverty and misery. We see this through the accounts of real sports heroes like Muhammad Ali, as well as the everyday marginalized communities where boys have no future except through the recognition of their sports abilities.

Torambo is no different. He finds a certain peace by beating his opponents to a pulp in the ring, but more importantly he gains the tentative acceptance of a society that looks down at him because he is Arab. He slowly finds himself surrounded not by the hungry, desperate friends he had always known, but rich ladies and gentlemen who find him a curiosity. He finds sexual satisfaction that he has never sought and the possibility of a deep sort of love that he has always hungered for.

The novel is divided into three parts, each named after the woman Torambo loves in his life. Relationships are a secondary aspect of the book, as they are of the main character’s life. It seems at times that falling in love with someone is linked to his desire, and at other times to something deeper, more meaningful. Certainly, the book can stand alone without any mention of Torambo’s love interests. But they form an impetus to his moods and an indication of his motivations.

The truth is important: He boxes because it is the only thing that gives him a leg up toward a full stomach and some sort of respectability among his peers.

Yet the roots of racism are ingrained deeply in the human mind and heart. Even as Torambo wins one boxing title after the other, and his money opens the doors that were always closed to him, he is still a “dirty Arab” who cannot be accepted into European high society. He is ridiculed for his religion and his culture even as those who ridicule him pay money to see him fight.

He says in the start of one fight: “I knew [my opponent] was only fairly good at taking blows, and there weren’t many people who rated him highly. All the same, everyone was expecting a miracle and praying that someone would shut the mouth of the dirty Arab whose meteoric rise was starting to upset people.”

Torambo’s story may be striking, but it’s not uncommon among a poor lower class. It also seems imperative today, just as it did in the time period the story is set. History repeats itself, and poverty and racism are not things of the past, nor will they ever be. Curtis’ translation is powerfully poetic and doesn’t take away from the original. The Angels Die is a must read for readers of international fiction, whether historical or contemporary.