The Angel of Rome: And Other Stories 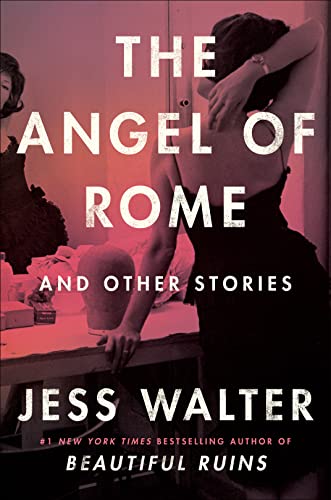 “The Angel of Rome is highly recommended. The stories represent some of Walter’s best writing.”

The Angel of Rome is a wonderful collection containing 11 stories and a novella. The rich and diverse assembly of voices and characters, the unique ways Walter structure his tales, the variety of places he brings his readers to—all are stellar. Not to forget, the author writes some really funny lines and infuses his tales with a considerable amount of humanity.

The stories grab the reader from the first line.

“Mother was a stunner.” The narrator is a nine-year-old girl.

“I have a crush on the mother of my worst student.” From a 50-year-old middle school science teacher.

“Oh, that Peter Pan hit-and-run prick.” A jilted lover waking up in the morning.

The best for last. “The famous actor was rubbing my tit with his elbow.” Young woman at a party.

The characters: There is the famous actor in a small town in Oregon described smoking only organic cigarettes, picking fake tobacco bits off his tongue, whinng “You know? About fame? How dispiriting it is, how dehumanizing? It’s like you’ve this . . . product.”

In “Fran’s Friend Has Cancer” an elderly couple, Max and Shelia, are in a restaurant dithering over a menu before the show. We’ve all been there—it is tedious—but Walter makes it interesting because the dithering becomes entangled with an inattentive waiter, the woman’s trip to see her son from a previous marriage, and a creative writing student at the next table transcribing the couple’s conversation in his journal.

Max grabs the journal and finds it is more than just the conversation. The student has added descriptives: “woman in bifocals, once pretty, man balding . . . voice whistling through false teeth.” “Fran’s Friend” is structured so that roughly three-quarters of the text is dialogue. But then as Max reads the journal, he remembers his stroke, his wedding, his radiation treatment, his fears—especially his fear of being alone. The story is only a dozen pages but is masterfully constructed and worth deconstructing for anyone interested in how to craft short fiction.

“Cross the Woods” is a very short story about a lonely mother waking up to find her lover gone, musing about how good he’d been now, and before, feeling sorry for herself. The author lets the reader feel Maggie’s sadness, “a yawing sense of being alone.” But then, she finds in the kitchen, Marcus teaching her little boy how to tie a necktie. “Cross the woods.” . . . “Over the Hill.” Her sadness is lifted, Marcus is redeemed.

“Before You Blow” is a tale that illustrates a feature found in a number of Walters’ tales: a flash forward, a scene or two ahead of the current time frame, then reversion to current time. “Before You Blow” starts with a 16-year-old waitress, Jeans, at a pizza parlor, hustled by the cook, Joey, a prelaw college senior. They hang with his buddy who is dating Selena, a Safeway cashier with a baby, but with a car, and are out on a double date and decide to go skinny dipping. Stop. Flash forward 30 years. Joey is a lawyer; Jeans is a hi-tech lawyer home visiting her father. She sees Joey’s balding bloated face on a bus stop bench advertising for DUI and personal injury cases. Back to Jeans at 16, they are about to get into the water. The car with the baby in it starts to move, goes over the riverbank, and into the water. Jeans dives in and saves the baby. Tie in with the flash forward: Joey is on the bank “clothes completely dry told you everything you’d ever need to know.”

In “To the Corner” Walter sets up a retired newspaper man, Leonard, whose wife died, and he stopped caring about anything, let the yard and garden go, neighborhood gone down. Son gives him a gun for protection. There is the vague sense he might use it on himself. Add in a delicious crew of young teens, the ones up in the Boone, (where everything that summer was “up in the”), rowdy, noisy not bad, just nothing to do, pants around their knees, raggedy shirts.

And one of the guys is named A-Sym “so-called because of his one droopy eye, scar, crooked smile.” In the middle of this tale Walter puts on a street dialogue show that lights up the story and the book. Worth the price of the book. Leonard begins packing his wife’s old clothes, then his, looks out at the kids, takes out a box to them. “Holds out belts like a deacon at one of those snake churches.” “What kind of country is this, where smart young men can’t afford belts? We can sent spaceships.”  Hesitation, then try belts, try shirts, ties, slacks. A new style has been born up in the Boone. And Leonard asks a couple of kids to come over to weed and plant.

“The Angel of Rome” is a rambling tender novella of Jack, a romantic young American student of Latin, who becomes woven into a web of a beautiful Italian actress Angelina Amadio, shooting a movie in Rome. Stir in an American actor Ronnie Tower who thinks Jack knows Italian (doesn’t) and he wants Jack to fix him up a date with Angelina (actually, Angelina’s assistant), fix the script (done with the help of the Latin class). It’s an Italian comedy that works out well for Jack. Years pass and with Ronnie’s help Jack becomes a writer for TV and the movies, and Ronnie and Angelina are married. It is a story that has the earmarks of itself as a script for a movie.

Should it not be evident by this point, The Angel of Rome is highly recommended. The stories represent some of Walter’s best writing.