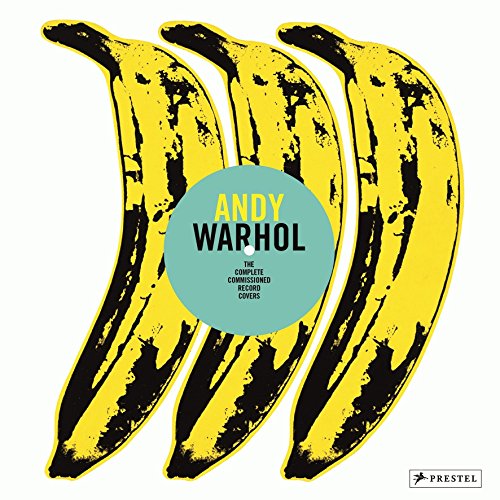 “will appeal to the art lover, the record collector, the social historian, the casual observer of culture, and the curious enthusiast.”

Andy Warhol: The Complete Commissioned Record Covers is a beautiful object, but it’s also a legitimate reference source for scholars, collectors, fans, and art enthusiasts. The book has been designed with impeccable attention to detail: stunning full-size reproductions, bold color choices, assertive yet unobtrusive san serif typeface, a judicious use of white space. The visual syntax makes the book a pleasure to observe, while the text itself is a delight to read.

This is a revised and expanded second edition of the original 2008 printing. Warhol’s shadow career as an album cover designer is exhibited in chronological order from 1949’s classico-curatorial A Program of Mexican Music to 1987’s for-charity compilation MTV High Priority.

This collection of more than 50 works stretches from the iconic and interactive (the peelable banana of The Velvet Underground & Nico, the working zipper of the Rolling Stones’ Sticky Fingers) to the workaday and obscure (the language-acquisition tool Madrigal’s Magic Key to Spanish). Warhol designed covers for rock, pop, soul, jazz, classical, spoken word, world music, and audio recordings of TV programs.

Rather than being perceived as an intriguing if innocuous sideline, Warhol’s album designs should be seen as a continuation of his work as a commercial illustrator and pop artist and should be exhibited alongside his movie stars, tin cans, and car crashes. The art here is no less fine. In fact, the album cover—an alluring mainstream package, a second skin for mass-mediated products—is the apotheosis of Pop and the Factory system. Dali, Basquiat, and many other serious artists have dabbled in this niche, but none were as devoted, prolific, or successful as Warhol. He did not slum as an album designer, but rather pulled this form within the embrace of his existing work.

On the issue of devotion: His remit for the Velvet Underground, for example, was not only to design but also to produce, manage, and Svengalify the band. His dedication was as pronounced and remarkable as his gift for the easily recognized and always-remembered images. Album cover art was his natural and inexorable métier. If Warhol had not worked in this field, we would have invented it.

The most welcome surprise here is the text. Maréchal provides a potted history of record cover art that not only touches on, but provides valuable insights into: the music industry, technological advances in recording, Warhol, pop art, and post-war culture as a whole.

This is a handsome coffee table book, as you might expect, but what you probably don’t expect is to be as captivated by the text as by the images. Andy Warhol: The Complete Commissioned Record Covers, weighty in every sense, will appeal to the art lover, the record collector, the social historian, the casual observer of culture, and the curious enthusiast.