And So It Goes: Kurt Vonnegut: A Life 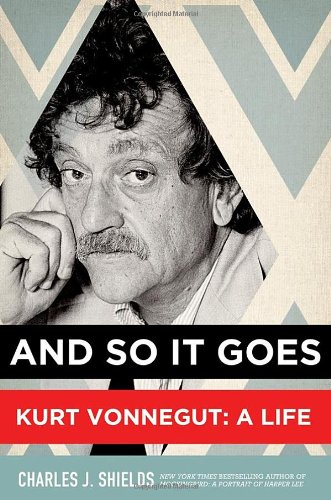 “Readers need not be familiar with Vonnegut’s oeuvre to enjoy this fascinating biography of an immensely talented and darkly complicated man. If the goal of a biography is to leave readers feeling as though they know the subject better than the subject knew themselves, then And So It Goes succeeds very well indeed because Charles R. Shields is, as he described himself in the letter that won over Vonnegut, ‘a damn fine researcher and writer.’”

Readers seek out biographies because they want to discover fascinating new people or rediscover someone they think they know well. Why did the subject act the way he or she did? What were they thinking? What life events shaped their behavior?

Why? is also the question that drives biographers. Or, when the subject is a renowned literary figure, as is the case with Charles R. Shields’s meticulously researched and eminently readable biography And So It Goes: Kurt Vonnegut: A Life, the question becomes: Why do this man’s writings continue to capture generation after generation?

Kurt Vonnegut, Jr., was one of the most prolific and beloved American writers of the 20th century. All 16 of his books are in print—no mean feat for a writer whose career spanned more than 50 years. His writing resonates with readers of all generations. Yale critic Harold Bloom anointed Vonnegut’s novel, Cat’s Cradle, as part of the Western canon, and in 2005, TIME magazine chose Slaughterhouse Five as one of the Best 100 Novels from 1923 to the present.

Mr. Shields first reached out to Vonnegut in the summer of 2006 by letter, asking for his endorsement for a planned biography. Vonnegut said no. Mr. Shields wrote again, this time making clear his passion for his subject and the reasons he was the best person to write Vonnegut’s biography.

“Someone else could cobble together a so-so version of your life just by mining what’s stored in library boxes and electronic files,” Mr. Shields wrote. “And it will happen soon, I think. But I’m the guy for the job—for doing it right, that is.” Then he added, “And I’m a damn good researcher and writer.”

This time, the answer came back, “OK.” For the next year, which also turned out to be the last year of Kurt Vonnegut’s life, Mr. Shields had unprecedented access to Vonnegut and his letters. Mr. Shields also interviewed 125 of Vonnegut’s contemporaries, friends, and family members, and poured through 1,500 personal letters, nearly all of them never before seen.

“What a biographer is looking for,” Mr. Shields explains in his introduction to the book, “are patterns of behavior. Vonnegut demonstrated a few that caught my attention right away. For example, after we agreed to work together, he would call late at night and rumble, ‘This is Kurt Vonnegut. How’s my biography coming?’ . . . An eighty-three-year-old man calling at night to talk is probably lonely. I wondered why my subject, famous and with many friends surely, might feel this way.”

The answers go back to Vonnegut’s childhood. “Nobody taught me anything,” Vonnegut is quoted in the book as saying, “—how to skate or even ride a bike.”

Vonnegut’s stories, Mr. Shields writes, “are rife with loneliness, bad relations between parents and child, unsuccessful attempts at romance, and a kind of chilliness of the heart that prevents the protagonist from feeling emotion.”

Vonnegut’s work first began appearing in print in the school newsletter during his junior year in high school. “Each person has something he can do easily,” Vonnegut is quoted as saying, “and can’t imagine why everybody else is having so much trouble doing it. In my case it was writing.”

And yet success was slow in coming. “Kurt was nearly fifty years old when a generation of young readers found him,” Mr. Shields writes. “‘I certainly didn’t go after the youth market or anything like that,’ [Vonnegut] said. ‘I didn’t have my fingers on any pulse; I was simply writing.’ But he did have a theory about his appeal. It was because he addressed ‘sophomoric questions that full adults regard as settled’: whether there is a God, what the good life consists of, whether we should expect a reward for moral behavior.”

In his 1969 novel Slaughterhouse Five, Kurt Vonnegut uses the phrase, “So it goes,” every time someone’s death is mentioned or described. On April 11, 2007, Kurt Vonnegut, Jr. passed away at the age of 83, making And So It Goes an appropriate title for his biography.

And So It Goes: Kurt Vonnegut: A Life breathes life into a man baby boomers thought they knew, and whose body of work a new generation is just discovering for the first time. Mr. Shields’s biography is the first book to examine, in full, the life of one of the most influential iconoclasts of our time.

Readers need not be familiar with Vonnegut’s oeuvre to enjoy this fascinating biography of an immensely talented and darkly complicated man. If the goal of a biography is to leave readers feeling as though they know the subject better than the subject knew themselves, then And So It Goes succeeds very well indeed because Charles R. Shields is, as he described himself in the letter that won over Vonnegut, “a damn fine researcher and writer.”