And I Do Not Forgive You: Stories and Other Revenges 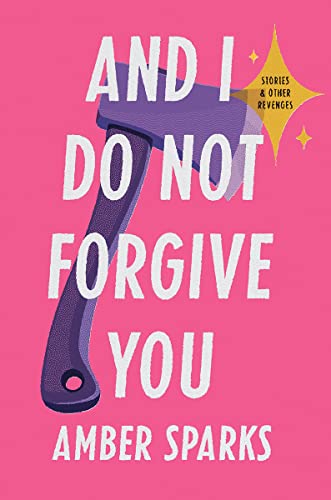 “And I Do Not Forgive You is uneven, but where it shines, it’s wonderful.”

This is an era of magnificent short story collections, but even with the elegance of the prose, the graceful insights, the carefully crafted characters, those collections all begin to feel the same, as though a book of excellent short fiction by women was reincarnating into new, brightly colored volumes that continued its existence. Like any Borgesian phenomenon, that endless volume’s wonders have paled, leaving a kind of unjust ennui where admiration should exist.

Amber Sparks’ And I Do Not Forgive You manages to step away from that endless reincarnation. Her approaches startle the reader, and the disruption, as much as anything, is what brings delight.

In “Mildly Unhappy, with Moments of Joy,” she explores the ending of a friendship between women with the frantic misery of an abortive love affair. The loss of an intense friendship is an unexpectedly terrible loss: “The mutual friends have not seen the homemade soaps at the usual retailers lately. Her sweaters always smelled like lilac and jasmine and sandalwood after visiting her friend; now they smell of exhaustion, of thin threads. She does not, she realizes, has never shown, the family of the friend; she cannot call or email them to ask. She is not a lover, so she cannot track them down with some great passion.”

In that passage, and in others of Sparks’ stories, what emerges is the essential truth toward which so many of these collections grope: most of women’s experiences remain just outside the realm of narrative. The stories we recognize culturally don’t reflect the pain of lived experience. These aren’t world-ending problems. Two upper-middle-class women who cease to be friends is nothing in the scheme of humanity. Yet there’s a personal urgency, an agony, to the lack of next steps, as though losses not formalized in cultural storytelling take on a special misery.

Sparks’ stories and style both recall Margaret Atwood’s later short fiction. The stories are vivid, a little bloody, and fully engaged with women’s representations in myth. In “You Won’t Believe What Really Happened to the Sabine Women,” the collective narrators “would eat evil men like mice.” “A Place for Hiding Precious Things” revises the widespread fairy tale of the King Who Wished to Marry His Daughter. The fairy godmother gives practical advice: “Pack light. . . . bring a little gold, your paints, the three dresses, a toothbrush and some extra underwear.”

Other pieces are more conventional, recalling that fine, endless book that haunts women’s writing.  “Everyone’s a Winner in Meadow Park” explores a cross-class friendship between a girl from a trailer park and her well-to-do but mentally ill best friend. Even that story is haunted by a ghost, but it’s a basic specter, present to prevent terrible crimes against little girls in a way that’s not quite satisfying.

A few pieces, finally, are simply gender explorations without real plot or new insight. “Is the Future a Nice Place for Girls” proposes that the present, flawed as it is, is at least an improvement on the feudal past for privileged girls and other princesses.  “We Were a Storybook Back Then,” at barely two pages, offers a brief view of a preteen trans girl in child’s words: “she was under a spell. She was really the princess of a far-off land but her father the king had remarried, and her wicked and terrible stepmother had turned her into a small boy out of jealousy.”

And I Do Not Forgive You is uneven, but where it shines, it’s wonderful. On the whole, its revenges are better than its stories, but both are worth reading, at least once, and many are worth keeping.