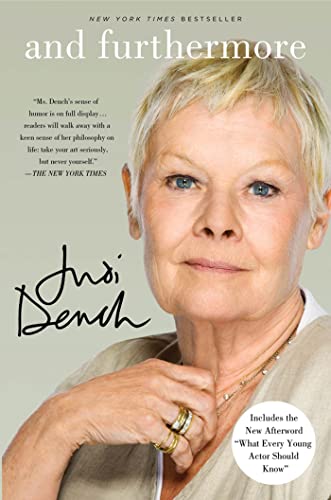 The first big laugh in Judi Dench’s highly enjoyable memoir And Furthermore is a visual joke on page one, where the reader is presented with a black and white picture of a group of very young girls, each dressed in some sort of finery—all in dresses with lace and wide skirts just meant for swirling, some with wide hats and ribbons, all with dancing slippers on their feet. Above the picture is the name of the chapter: “Early Days, 1934–1957.” There is no caption below the picture, identifying the persons or place.

It takes the reader a moment to adjust to the photo, just as it takes a moment to clear your vision when coming indoors from bright sunshine. And then the reader laughs aloud, upon realizing that standing dead center in this group of highly emotive young ladies is a very young Judi Dench, her skirt held outward at the sides by her welcoming arms, her left foot, turned and lifted slightly as if she were about to glide downstage on toe. The young one smiles broadly with her whole face, with her mouth and cheeks and eyes, and the smile is the same, Judi’s. Indeed, perhaps more than six decades later, the reader realizes that the face is amazingly the same, as is the haircut.

Though we may never know who the other young girls in the picture are—and not from lack of trying on their part, let me assure you—there is no mistaking Judi.

Nor has there ever been. Maggie Smith perhaps aside, no other British actress has so defined her art, whether the medium be the stage, or the movie or television screen, than has Dame Judi Dench.

And now, with a lifetime of anecdotes and memories to share, she fulfills what must be her happiest obligation to the British theater—the theatrical memoir. And in doing so, she masters the medium of the printed page quite nicely, too.

The yardstick for this sort of memoir—one in which the reader is given very little actual or personal information and a great deal of information on the backstage antics and the rehearsal agonies of specific well-remembered productions—is, for this reader at least, John Gielgud’s An Actor and His Time, a gossip fest that at once honored the art of the stage and managed to reveal the clay feet of most of those who trod it. Either that or Diana Rigg’s brilliant No Turns Unstoned: The Worst Ever Theatrical Reviews, which, while not specifically a memoir (instead it collected, as promised the most hateful and hilarious theatrical reviews ever published) managed the same special blend of honoring the theatrical art while simultaneously giving the reader a peak at the face beneath the makeup.

Dame Dench maintains the tradition very nicely here. Indeed, she credits Gielgud for having been supportive of her in her early days as an actress, to say nothing of working with Rigg in what might have been the definitive version of A Midsummer Night’s Dream. And while she manages to name a good many names and tell a good many tales, she also manages upon occasion to speak directly to her reader:

“The thing I try and tell myself on the nights I don’t feel like performing anything is that the audience has made the effort of going and getting the tickets, they have finished work, have cleaned up somewhere, have come to the theatre; their gesture is the first, yours must be the second, it is a gift you must return.”

This is as beautiful an explanation of a life in the theater as this reader has come upon. But to this, Dench adds:

“Of course it isn’t always as easy as that. There was one occasion in The Comedy of Errors when I didn’t feel like it, so I thought, I know what I’ll do, I will just play the whole thing to somebody. I knew nobody there that night, so I saw a lady in a green coat, and I thought, I’m going to do it entirely for her. So I did it absolutely a hundredfold to her, and told everybody that was who I was doing it for, and when I came back after the interval she had left.”

Such is the stuff of And Furthermore. And entertaining stuff it is. Does it take a yeoman’s knowledge of Shakespeare to fully enjoy this book? No—but it helps, just as it helps that the reader have an active interest in theater.

Dame Dench makes it clear early on that she credits author John Miller with writing her definitive biography in his 1998 book, Judi Dench with a Crack in Her Voice, as well as the two subsequent books that they have worked on together. And so she felt, when asked to write her memoir, quite free to simply annotate that which has already been said. Thus the title And Furthermore. And thus the loose-limbed nature of the book. It is as if the reader and Dame Judi were sitting and talking over a cup of tea and she good-naturedly agreed to answer all the reader’s questions.

So we are treated to many bits and pieces of information:

We learn, for instance, which one of Shakespeare’s masterpieces elicits the sentence “I loathe the play.” (The Merchant of Venice.)

We learn the identity of the British actor who insisted that Dame Judi tap on the water pipe on her dressing room wall should American actor Richard Chamberlain (then at the zenith of his looks and fame while playing TV’s Doctor Kildare) come backstage after a performance of The Promise, so that he might casually stroll in and meet him. (Ian McKellen.)

We learn how a director was able to convince Dame Dench to play as role that required nudity: “This girl used to take air baths, and I had to run across a meadow with absolutely no clothes on.” How did they do it? (“They said to me, ‘It’s fine, because you can keep your wig and earrings on.’”)

We learn why Judi Dench spent so many years on stage before ever appearing on camera. (At one early screen test, she was told, “Well Miss Dench, I have to tell you that you have every single thing wrong with your face.” And so she quietly left, thinking, “There is no point going on with this.”)

And, best of all, we learn that, should you be waiting in the reception room of Buckingham Palace to be knighted or, in Judi Dench’s case, made a Dame of the British Empire and ask, as one gentleman did, “May I smoke?” You will be told, “No, but you my play the piano.”

In the pages of And Furthermore, Judi Dench gives us her memories of more than fifty years spent on stage and in front of the camera. She does so with wit, flint and relish. And she leaves us with some very good news when she closes the book by writing:

“What do you retire for? You retire if you are in a job that has just kept you employed, and given you some kind of income, and then you retire to do things that you really want to do. Well, I am doing the things I want to do now, so I don’t want to retire. Actors are really remarkable people to be with. I like the company of other people, but I love the company of actors and to be in a company . . . You don’t need to retire as an actor, there are all those parts you can play lying in bed, or in a wheelchair.”